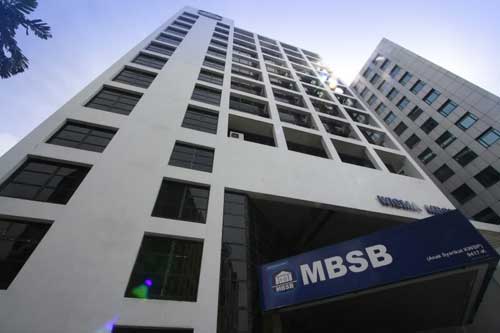 GROWING RETAIL BUSINESS: Photo shows Wisma MBSB in Kuala Lumpur. MBSB has largely benefited from its renewed business direction and focus which allows the group to intensely grow its retail business, largely dominated by the personal financing to the government servant segment.

On a quarterly basis, the group’s pre-tax profit surged RM245.7 million which was an increase of 38.5 per cent from the previous quarter’s RM177.4 million, revealed the group in a press release.

The pre-tax profit for the year also recorded an improvement of 142.8 per cent of RM144.5 million against RM101.2 million reported in the fourth quarter of 2011.

These figures resulted in improved basic net earnings of 36.7 sen and a return on equity of 34 per cent per annum.

In announcing the results, MBSB president and chief executive officer Datuk Ahmad Zaini Othman said, “This strong performance is the result of the culmination of transformation initiatives undertaken by the company over the last four years.

“MBSB has largely benefitted from its renewed business direction and focus. These changes have allowed MBSB to intensely grow its retail business, largely dominated by the personal financing to the government servant segment.”

Ahmad Zaini further added that the creation of new income streams in 2010 via the expansion of retail businesses had been generating significant fee-based income, including the provision of bancatakaful, will writing and new services at its branches nationwide.

A continuous rise in loans growth was also attributed to the offering of new financial products to the corporate segment two years ago. Contract financing, SME Cash Express and wholesale banking had provided the company with an expanded corporate customer base and diversified income.

Ahmad Zaini added, “We have also achieved significant operational improvements as a consequence to the transformation programme.

The company’s liability programme continued to be strengthened with marked improvements on the deposit level.

Deposits which stood at RM21.5 billion as at December 31, 2012 grew by 59.1 per cent from December 31, 2011 of RM13.5 billion, Meanwhile, corporate depositors remained largely the government agencies as well as federal and state government-linked corporations.

On this stance, Ahmad Zaini said, “Our new strategy to resolve these accounts through rehabilitation and revival of viable projects have resulted in the execution of key settlement agreements. It is a critical first step to begin the recovery of these accounts.”

On another development, branch network expansion for the year 2012 has led to the opening of one new branch in Kelana Jaya, Selangor and three new representative offices in Lahad Datu, Sabah, as well as Kota Samarahan and Sarikei in Sarawak.

This brings the group’s total to 36 sales and services sencre and 12 representative offices nationide.