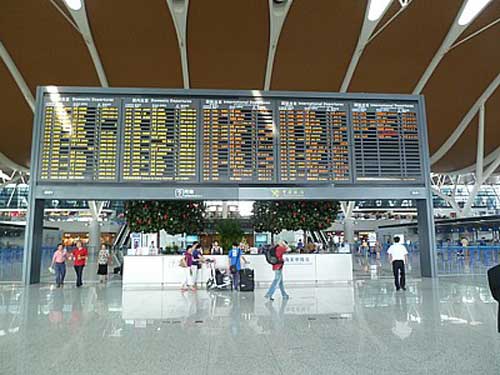 KUCHING: The International Air Transport (IATA) recently announced the full-year traffic data for 2012 showing a 5.3 per cent year-on-year increase in passenger demand and a 1.5 per cent fall for cargo.

According to IATA data the 5.3 per cent increase in passenger demand was slightly down on 2011 growth of 5.9 per cent but above the five per cent twenty-year average.

Load factors for the year were near record levels at 79.1 per cent.

Demand in international markets expanded at a faster rate (6.0 per cent) than domestic travel (four per cent).

In both cases emerging markets were the main drivers of growth.

The 1.5 per cent fall in demand for air cargo compared with 2011 marked the second consecutive year of decline, following a 0.6 per cent contraction in 2011.

The freight load factor for the year stood at 45.2per cent, it revealed.

“Passenger demand grew strongly in 2012 despite the economic bad news that dominated much of the last twelve months.

This demonstrates just how integral global air travel is for today’s connected world.

At the same time, near-record load factors illustrate the extreme care with which airlines manage capacity.

“Growth and high aircraft utilisation combined to help airlines deliver an estimated US$6.7 billion profit in 2012 despite high fuel prices.

But with a net profit margin of just one per cent the industry is only just keeping its head above water,” said Tony Tyler, IATA’s director general and chief executive officer (CEO).

In contrast to the growth in passenger markets, data indicated that the air cargo market contracted by 1.5 per cent. The industry suffered a one-two punch.

World trade declined sharply and the goods that were traded shifted towards bulk commodities more suited for sea shipping.

“The outstanding bright spot was the development of trade between Asia and Africa which supported strong growth for airlines based in the Middle East (14.7 per cent) and Africa (7.1 per cent),” said Tyler.

As international passenger demand grew by six per cent in 2012, the strongest growth came from emerging markets, particularly the Middle East (15.4 per cent), Latin America (8.4 per cent) and Africa (7.5 per cent).

Capacity grew more slowly than demand (four per cent) supporting a near record level international load factor of 78.9 per cent.

Statistices showed that Asia-Pacific carriers saw passenger growth of 5.2 per cent in 2012 which was stronger than the four per cent growth in 2011, though the 2011 figures were affected by the Japanese tsunami.

The 2012 performance was in line with the global average and contributed about a fifth of the total industry growth.

After a slow start, the fourth quarter was boosted by a revival in the Chinese economy and strengthening momentum in Asian exports and imports.

Capacity expansion of just three per cent for the year kept the load factor at a healthy average of 77.5 per cent.

On the downside IATA data indicated that European airlines’ passenger traffic expanded 5.3 per cent in 2012, sharply down on the 9.5 per cent growth of 2011.

Growth was generated by the long-haul performance of eurozone airlines (within-EU travel stagnated due to slow economic growth).

Additionally, around a quarter of the growth in European airline international traffic came from airlines outside of the eurozone (Turkey being a major contributor).

Capacity increased by 3.1 per cent, pushing the full-year average load factor to 80.5 per cent.

Combined with other benefits of industry consolidation, the European industry broke even on the year – a much stronger financial performance than would be expected under such harsh economic conditions.

On the domestic passenger demand front, data revealed that overall domestic air travel grew by four per cent in 2012.

China (9.5 per cent) and Brazil (8.6 per cent) were the strongest performers.

India was the weakest with a 2.1 per cent contraction on 2011 levels.

Total capacity growth (3.8 per cent) was in line with demand (four per cent) and the domestic load factor stood at 79.5 per cent.

While passenger demand was improving globally, air cargo  both domestic and international declined for a second straight year, falling a further 1.5 per cent in 2012 after a 0.6 per cent decline in 2011.

Air cargo had come under pressure from a slowdown in world trade growth, and shifts in the freight commodity mix.

Freight capacity grew just 0.2 per cent over the year, and the freight load factor was 45.2 per cent, Tyler highlighted.

Asia-Pacific airlines (the largest players in the air cargo market) reported a 5.5 per cent decline in demand and cut capacity by 2.4 per cent.

As the world’s major manufacturing centre, the region suffered from the slowdown in demand from Western markets.

The freight load factor, although remaining the highest of all regions at 56.1 per cent, fell more sharply than anywhere else, hurting cargo profitability.

“We are entering 2013 with some guarded optimism. Business confidence is up. The eurozone situation is more stable than it was a year-ago and the US avoided the fiscal cliff. Significant headwinds remain. There is no end in sight for high fuel prices and gross domestic growth growth is projected at just 2.3 per cent.

“But improved business confidence should help cargo markets to recover the lost ground from 2012. And the momentum built-up at the year-end should see the passenger business expand close to the five per cent historical growth trend. 2013 will not be a banner year for profitability, but we should see some improvement on 2012,” said Tyler.