Sunday, September 20
You are at:Home»News»Sarawak»Risk of becoming squatters in own land real — Sidi 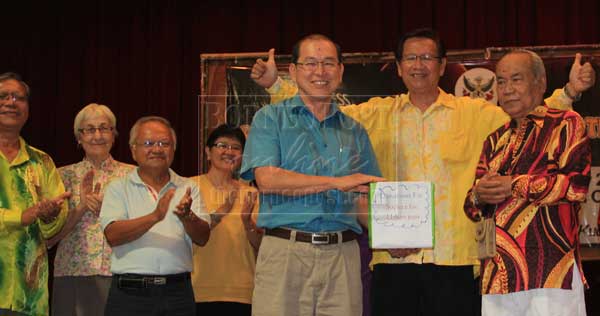 ROUND OF APPLAUSE: SKUP members, led by its chairman Fabian Wong (second right), and others applaud in appreciation after the presentation of proceeds by Sidi (right).

KUCHING: Ibans and other native communities are at risk of ending up as squatters in their own land if their rights to their land continued to be disputed.

Sarawak  Dayak  Iban  Association (Sadia) president Sidi Munan, who said this, pointed out there had been many cases of native land being encroached by plantation companies and other commercial entities.

“If we are not careful, we could be squatters in our own land because of problems of encroachment. I am serious about this (possibility happening),” he told the audience at Sadia Charity Dinner here on Saturday.

Sidi also dwelled  on the  hardship faced by urban  squatters who had migrated from the rural areas in search of better prospects in the cities and big towns.

He praised two non-governmental organisations – Kuching Society for the Urban Poor (SKUP) and Green Ribbon Association – for their good work in assisting squatters and the poor in Kuching.

Sidi added that Sadia and Sarawak Dayak National Union (SDNU) would like to work together with organisations like SKUP and Green Ribbon for the sake of the poor and the needy.

“We are willing to cooperate with anybody championing the poor. SKUP and Green Ribbon require a lot of volunteers, we in Sadia and SDNU could be the source of volunteers for them.”

Part of the proceeds from the night was donated to SKUP.