Saturday, July 11
You are at:Home»News»Sarawak»Mawan to contest in Saratok in polls? 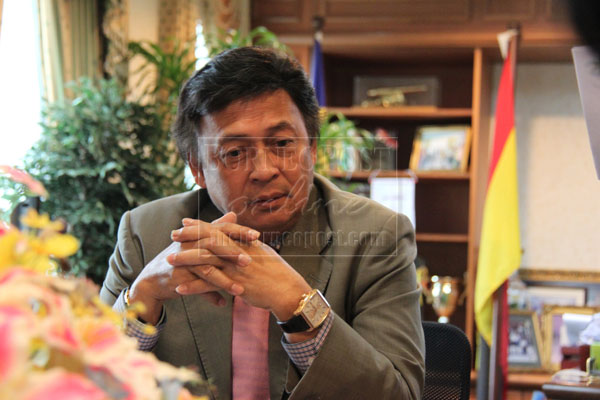 KUCHING: Speculation is rife that SPDP is having sleepless nights following Krian assemblyman Ali Biju’s indication that he might contest in Saratok in the impending 13th general election.

The grapevine has it that SPDP is contemplating replacing Saratok MP Jelaing Mersat with a new face to take on ‘giant killer’ Ali, who is from PKR.

Ali hit the limelight in the last state election in April 2011 when he trounced SPDP deputy president Datuk Peter Nyarok Entrie in Krian with a 2,090-vote majority.

However, coffee shop talks of late had turned their attention to the big man himself – Tan Sri William Mawan Ikom, the party president.

According to sources, Mawan had often joked with close friends that he might consider contesting in Saratok as it was his hometown and to save it from falling into the hands of the opposition.

However, his close friends believed Mawan, who is also Minister of Social Development, might be serious about his intention.

Mawan hails from Ulu Budu, which is part of Saratok, and that qualifies him as “a local candidate”. He could also count on his many relatives, friends and supporters to ensure victory.

There is also talk that Ali, who is from neighbouring Nanga Budu, might withdraw if Mawan is fielded in Saratok.

Mawan’s supporters told The Borneo Post that his position as president of Sarawak Dayak National Union (SDNU) had not only brought him fame but had also elevating his status in the eyes of the Dayak community, so they assumed that would be to his advantage.

In addition, Mawan’s political strength was his inclination to be close to the people on the ground, another plus sign.

In May last year, Mawan had told The Borneo Post that the party might off load Jelaing and that he (Jelaing) was aware that the party had submitted more than one name to the top BN leadership for consideration for Saratok.

Apart from Saratok, other seats which belong to SPDP are Bintulu, Baram and Mas Gading.

For now, Jelaing is the front runner for Saratok, and senior vice president Datuk Jacob Dungau Sagan for Baram.

It is believed that SPDP only named Bintulu MP and deputy president Datuk Seri Tiong King Sing for Bintulu and Anthony Nogeh Gumbek for Mas Gading.