Wednesday, August 17
You are at:Home»News»Sarawak»‘SGH Heart Centre has two surgeons’ 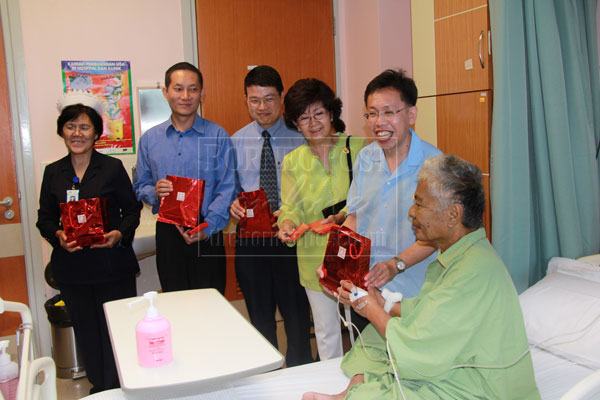 FOR YOU: Dr Sim (second right) presents CNY gifts to a patient while (left to right) Anna, Lim, Dr Chan and Anne look on.

KUCHING: The Sarawak General Hospital Heart Centre (SGHHC) has engaged a second surgeon since last Dec to cope with the increasing demand for heart surgeries here.

SGHHC’s visiting cardiologist Prof Dr Sim Kui Hian said: “The new resident doctor is Dr John Chan Kok Meng. The cardiothoracic surgeon had been serving at the Imperial College in the United Kingdom for many years before coming here.”

The SUPP secretary general said this during the Sarawak Heart Foundation’s (SHF) Chinese New Year visit to the centre in Kota Samarahan yesterday.

He said before the arrival of Dr Chan, Dr Jong Yuan Hsun was working alone at the heart centre. And to meet the high demand for heart surgeries, SHF brought in visiting doctors four times last year.

Among the many activities SHF did for heart patients, he said, was sending patients to other places for treatment, sending doctors to be trained overseas and buying advanced medical equipments for SGHHC.

“The growing number of patients is faster than the trained doctors. With a second surgeon here, we could see the waiting list is getting shorter. But I advise everyone to take care of their health.

“We have preventive programmes to be carried out at some primary schools and start with obesity programme to educate young children to stay away from heart diseases,” he said.

He said SGHHC had 86 beds up to date and by next month, he hoped to see another 34 beds added to the number, an improvement to just 20 beds when it opened in 2010.

With cooperation from the government and private sector, it had been able to hold similar activities in other major towns in Sarawak like Sibu, Bintulu, Miri and Sarikei.