Monday, March 30
You are at:Home»News»Sarawak»Asean International Film Festival from March 28 to 30 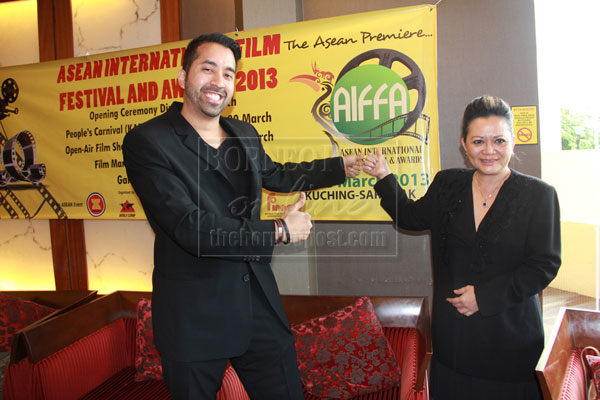 EXCITING FILM FEST: Kamil (left) and Livan giving their thumbs up to the Asean film festival.

KUCHING: The first ever Asean International Film Festival and Awards 2013 (AIFFA 2013) will be held here from March 28 to 30.

The film festival director Livan Tajang said: “The festival aims to leverage on the attendance of participants with an extensive background in filmmaking and have them share with the audience the intricacy of making films.”

She said there would be an ongoing Karnival Rakyat at the Kuching Waterfront and screenings of all nominated feature films at the Old Courthouse from March 29 to 30.

There will also be a series of exhibitions, seminars, meet and greets with celebrities and interactive panels at Pullman Hotel, Kuching.

One of the highlights will be an acting workshop, led by Kamil Haque, an actor, acting instructor, director and producer based in Los Angeles and Singapore. He will be sharing his skills with aspiring actors through his acting workshop.

Kamil is the youngest and first Asian to teach acting at the Lee Strasberg Theatre and Film Institute which has trained notable alumni like Angelina Jolie, Scarlett Johansson and James Dean.

He said:” The acting workshop is for me to share skills I have learnt and taught my clients. We hope this event can bring Asean films a step up to like Bollywood and China films and eventually reach world standard.”

In the near future, Kamil will be looking to expand his operation in the Asean region with the opening of an acting school in Singapore.

He will be coordinating with the Singapore film and media industry to ensure there is a visible Singaporean presence at the AIFFA 2013.

Meanwhile, at only RM18 per person, patrons of the opening day of the festival are able to enjoy a journey into the cinematic world of Asean amidst the lush Borneo rainforest.

Award winning films like ‘Thy Womb’ directed by one of Philippines’ most prominent directors will be screened during the festival.

Indonesia’s ‘Habibie and Ainun’ which has captured the hearts of millions of Indonesians will have its premier in Malaysia through AIFFA 2013.

The marathon showcase of films will start on March 28, with the screening of short films from 12pm at the Sarawak Cultural Village.

At sunset, the showcase expands to six other venues at the village to include a non-stop, all night screening of feature films till 7pm the following day.

There are 67 films from Asean to be shown.

“Patrons are encouraged to bring blankets and chairs as they enjoy almost 20 hours of films amidst various art and craft and food stalls,” said Livan at a press conference here yesterday.

Highlights of the night also include the announcement of feature film nominees eligible for awards on March 30 at the final Gala Dinner.

The winners of the short film competition will be announced on the opening night. There are 33 entries from Malaysia for the competition.

Celebrities and filmmakers from Malaysia, Asean, Hollywood and Bollywood have been invited to the festival to meet fans.

Malaysian director, writer and producer, U-Wei Shaari has been appointed as the Head of Jury for the AIFFA 2013.

The film festival is endorsed by Ministry of Tourism Malaysia and fully supported by the Ministry of Information, Communication and Culture Malaysia, Ministry of Foreign Affairs Malaysia (Asean-Malaysia national Secretariat) and the National Film Development Corporation Malaysia (FINAS).