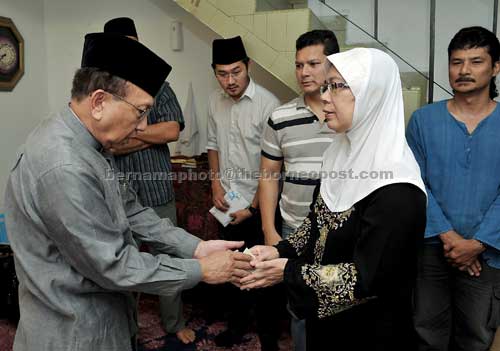 KUALA LUMPUR: The Information, Communications and Culture Ministry will carry out a study on the late veteran actor Kuswadinata’s longevity in the movie industry so that it may be emulated by today’s and future generations.

Its minister Datuk Seri Dr Rais Yatim said despite his poor health, Kuswadinata persevered to continue contributing to the creative industry in general and film industry in particular.

“These characteristics can be used as examples for actors in the future. We have lost an artiste who had a long background and struggle in Malay film and drama production.

“He had extensive experience in Singapore with Tan Sri P.Ramlee, S.Roomai Noor and Omar Suwita,” he told a news conference after paying his last respects on Kuswadinata at his house in Taman Rasmi Jaya, Ampang, near here, yesterday morning.

Kuswanidata, real name Kuswadi Bujang, died at age 74 at Ampang Hospital at about 5pm on Saturday from colon cancer and kidney problem.

Rais said Finas would be responsible for the contributions and historical records regarding the actor’s struggle in his acting career.

The Singapore-born actor began his career in 1957 with the Cathay Keris film production company.

He will always be remembered as Abang Kus in the film Seniman Bujang Lapok, and his roles in other movies such as Ibu Mertuaku, Antara Dua Darjat, Lang Buana and Gerak Khas Tiga. — Bernama