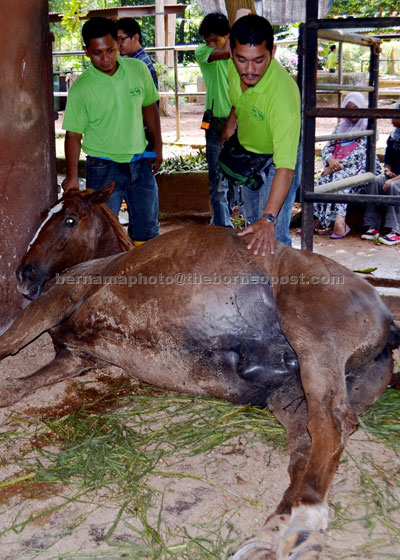 MELAKA: A sun bear and a thoroughbred horse were found dead, suspected to have been poisoned, at the Melaka Zoo and Night Safari here yesterday and Sunday.

The zoo’s veterinary officer, Dr Zubaidah Kamarudin, said the female bear, believed to have been 14 to 16 years of age, died at 5pm Suday. She said the 17-year-old horse, named ‘Basket’, was found dead at 7am yesterday.

In the first incident, the bear was reported to have been behaving in a weird manner before it was examined by its caretakers and a supervisor.

“It was epileptic, salivating in excess and suffering from a bout of diarrhoea when they examined her…but she died five minutes later,” said Dr Zubaidah when met at the zoo.

A post-mortem at 8pm showed that the bear, which the zoo had looked after since 2000, died after eating a banana laced with poison.

In the second incident, the horse was found dead in its stable and an autopsy was expected to be done later yesterday.

Samples of stomach contents would be sent to the chemistry department to determine the poison used in both cases.

Dr Zubaidah said, a plastic bag with oranges, banana and sugar cane which were laced with poison, was found at the enclosure of the chimpanzee, but was uneaten.

As a result of the incidents, Chief Minister Datuk Seri Mohd Ali Rustam said, visitors would only be allowed to feed certain animals with food bought from the zoo, beginning yesterday.

Speaking to reporters after a briefing by Dr Zubaidah at the zoo, he said the zoo management would install closed-circuit television cameras to protect the animals.

Mohd Ali, who said a police report was lodged on the matter, said RM10,000 would be given for information leading to the arrest of the culprit. — Bernama