Thursday, June 24
You are at:Home»Sports»Entries invited for Sarawak Health Marathon 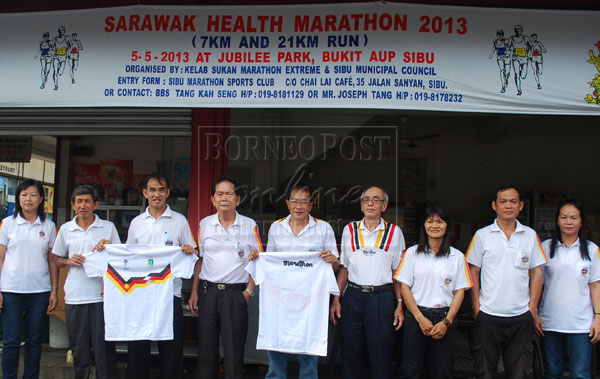 THE BIGGEST RUN: Tang (fourth from left) with Tiong (third and fifth from left) display the free T-shirt to be given away to the first 600 participants to register.

SIBU: Registration for the 13th edition of the Jubilee Park Sarawak Health Marathon to be held on May 5 at Sibu Jubilee Park is now open.

Kelab Sukan Marathon Extreme, Sibu chairman Tang Ka Seng reminded those who had already got their entry forms to submit their entries as early as possible.

“The first 600 runners who register with us will get a free T-shirt. So hurry while stock last,” he told a press conference yesterday morning.

Tang revealed that the total prize money is RM32,000.

He expected the run to attract runners from all over the country, including several seasoned runners from West Malaysia.

The run is divided into six categories – the 21km Men’s, Women’s Open and Men’s Veteran, and the 7km Women’s Veteran, Boys’ and Girls’ Junior.

There is a separate category for the 7km Fun Run for anyone interested to join in.

However, only the 31st to 35th finishers for the Women’s Open and Men’s Veteran will get RM50.

A separate RM150 will be given to the youngest man and woman who qualified for the 21km category.

However, the 31st to 40th finishers for the Women’s Veteran will get RM30 each.

The closing date is April 30.

Entry forms are available from SMSC c/o Chai Lai Café, and entries will only be accepted from March 1 onwards.

The run is jointly organised by the club and Sibu Municipal Council, assisted by the Police and Sibu Red Crescent Society.

The main sponsors are Ta Ann Holdings Bhd and Dato Wong Kuok Hea while the official drinks sponsors are Milo and V-Soy.