Friday, August 6
You are at:Home»Sports»Pandelela bags another honour 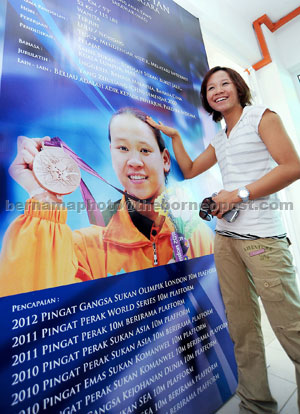 LATEST ACCOLADE: Pandelela touches a poster of herself during her visit at the Sarawak Aquatic Centre in Kuching, in this Aug 28, 2012 file photo. — Bernama photo

Pandelela from Sarawak, walked away with RM10,000 and a trophy that was presented by Youth and Sports Minister Datuk Seri Ahmad Shabery Cheek.

In a pre-recorded video clip that was aired during the prize presentation ceremony, Pandelela who apologised for not being able to be present to receive the award since she was currently undergoing training in China, thanked SAM, her parents and her coach who had helped her achieve the desired results.

“I hope the award today will further inspire me and other athletes to continue their search for excellence in the future,” she said.

The 2011 Sportswoman of the Year had won a silver medal at the World Diving Championships in Moscow, Russia in 2011 and a bronze medal at the 2011 World Universiti Games in Shenzhen, China.

Meanwhile, The Star journalist Rajes Paul was awarded the 2012 SAM-KBS Journalist award which came with RM7,000 and a trophy. — Bernama