Thursday, August 6
You are at:Home»News»Sarawak»Redeems, Unimas to do study on Mt Singai 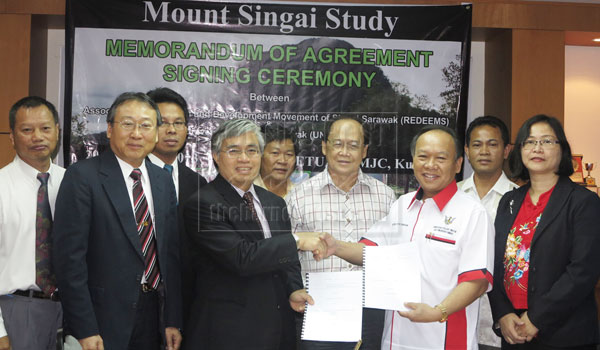 MEMORANDUM OF AGREEMENT: Khairuddin (third left) and Nansian exchanging the documents, witnessed by those present.

KUCHING: The Association of Research and Development Movement of Singai Sarawak (Redeems) and University Malaysia Sarawak (Unimas) will work together to conduct a comprehensive study and research on Mount Singai.

This study would be for their mutual interest and contribute to the advancement of research and scientific exchanges between the two parties.

Following the signing of Memorandum of Agreement (MoA) between the two parties yesterday, Redeems president Datuk Peter Nansian Ngusie said the cooperation was significant to the community in Singai and the state.

He said the agreement was made following a multi-disciplinary expedition of Singai area from Sept 13 to 19 in 2010 by researchers from different institutions and agencies including those from overseas, encompassing the overall environment of Singai area.

“Our research will cover the overall environment – physical, biodiversity, culture and religion of Singai area. The goal of the study is to protect and conserve these components as well as to include them into eco-tourism products,” he said.

He explained that the study would comprise a comprehensive research on streams, vegetation, animals which include amphibians, reptiles, small mammals, birds, and butterflies; education, tourism aspects, tourism potential and cultural heritage.

Unimas vice-chancellor Prof Datuk Dr Khairuddin Abdul Hamid, who also spoke at the signing ceremony yesterday, said the comprehensive research on the biodiversity in Singai area would be used as a reference for academicians, students and the society at large.

He explained that the university had for the past 20 years conducted numerous research and development projects with the various ethnic groups in the state.

On Unimas, he said the university was not only to produce quality graduates but also to conduct research on the environment and local communities for knowledge advancement.

“A detailed study of the environment and people of Singai had not been conducted. As such, the scientific research of this area is very important to the community and at the same time to contribute to advancement of research and scientific exchange between Unimas and Redeems,” he said.