Sunday, October 2
You are at:Home»Business»Malaysia to see positive GDP growth in 2013 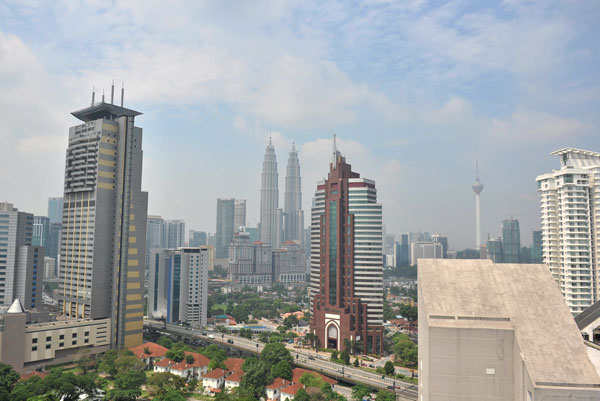 OPTIMISTIC STANCE: With Malaysia garnering a healthy 6.4 per cent GDP growth in 4Q12, many analysts and economists, including Anthony Dass, are taking an optimistic stance for the country’s GDP growth in 2013. — Bernama photo

KUCHING: With Malaysia garnering a healthy 6.4 per cent gross domestic product (GDP) growth in the final quarter of 2012 (4Q12), many analysts and economists are taking an optimistic stance for the country’s GDP growth in 2013.

According to the economics team at the research arm of Kenanga Investment Bank Bhd (Kenanga Research), this recent announcement beat its own sceptical forecast of 4.3 per cent and market consensus of 5.5 per cent.

“The better than expected growth can be attributed to strong domestic expansion, much of which is courtesy of projects directly and indirectly related to the Economic Transformation Programme (ETP),” it outlined in a report yesterday.

“Domestic demand as a whole expanded by 7.5 per cent in the fourth quarter. Compared with the previous quarter, the 4Q12 GDP moderated to 2.9 per cent quarter-on-quarter from 3.3 per cent in 3Q12.

“For the whole of 2012, GDP grew by 5.6 per cent compared with 5.1 per cent in 2011, also beating our five per cent estimate and market consensus of 5.4 per cent.” For the whole of 2013, analysts reckoned that Malaysia would have a ‘tough act to follow’ judging from the high base comparison previously seen.

“We do expect the global situation to improve in 2013, but believe that it will only really take effect in the latter half of the year. So, value-added manufacturing will only begin its uptrend recovery later in the year,” it noted.

“Even if some signs point to recovery as early as the second quarter, it will take some time before for the adjustment period (especially in the US and Europe) before consumers are confident enough to spend.

“Therefore, we forecast 2013 GDP at 5.3 per cent, an upward revision from our previous forecast of 4.7 per cent as we expect that a relatively stronger domestic demand growth in 1H12 to counter a weak export environment.”

Underpinned by the robust growth in 2013, Anthony Dass, the chief economist with the research arm of MIDF Amanah Investment Bank Bhd expected the positive economic growth momentum to continue in 2013.

“Growth will continue to emanate from the robust domestic demand complemented by exports,” he outlined in a online note.

“We expect positive growth catalysts to come from consumer spending driven by healthy labour market and positive consumer sentiments as well as strong investments from the on-going ETP projects combined with the roll-out and implementation of new projects.

“We also anticipate more inflow of quality and high value-add foreign direct investments; while exports are to improve on the back of improved global trade and firmer commodity prices.” Dass reiterated his 5.8 per cent growth projection for 2013 on the back of stronger domestic demand and improved exports.

“In our projection, we estimate an issuance of Malaysian Government Securities worth RM80 billion to RM85 billion. Meanwhile, our lower end of 2013 growth is 5.5 per cent, which we attribute will be mainly due to the high base comparison.”

Meanwhile, an analyst from RHB Research Institute Sdn Bhd opined that Malaysia’s real GDP would sustain its growth at around 5.4 per cent in 2013, compared with 5.6 per cent in 2012.

With still no news about when the General Election (GE) will be held, Kenanga Research was of the opinion that the domestic economy would see some easing in 1Q13.

“Uncertainties about the GE means that many will opt for a wait and see stance,” they highlighted.

“Though there could be some improvements in consumer spending due to the festivities in the 1Q12 and freebies under the Budget 2013 being rolled out, the less working days in February coupled with easing in capital investments in light of the GE means that we are forecasting the 1Q13 GDP to moderate to 4.5 per cent.

“This is higher than our earlier forecast of 3.7 per cent thanks to the growth momentum build up in the 4Q12 which we believe may offer a bigger buffer to the weak external demand. BR1M is hardly going to push consumptions to levels significant enough to add percentage points to the GDP.”