Monday, May 23
You are at:Home»News»Nation»Preserving the Jawi heritage from Tanjung Malim to Busan 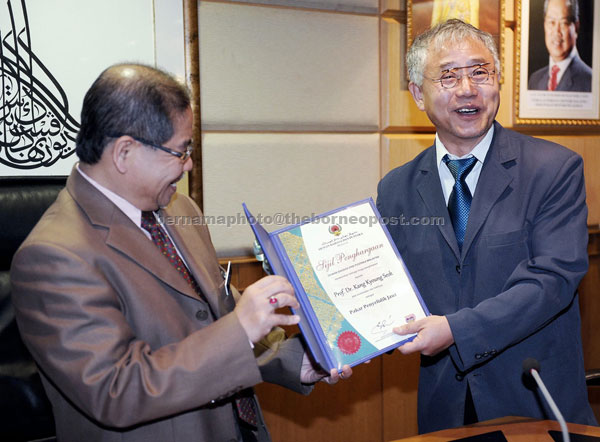 KUALA LUMPUR: Prof Dr Kang Kyoung Seok is the only Korean expert in Jawi scripts and his expertise has been recognised by the Dewan Bahasa dan Pustaka (DBP), the government body that looks into the proper usage of the Malay language.

The 58 year old academician’s passion and field of study has been the Malay culture and the Jawi alphabets.

Jawi letters we used extensively in Malay written works in the early days before it was replaced by Romanised alphabets.

Dr Kang who relayed his concern in an article over the fate of the Jawi scripts which is losing importance among Malaysian youths.

On Jan 16, this writer managed to catch up with Kang, sadly on his last day in Malaysia after his three-year term as the Visiting Professor at Universiti Pendidikan Sultan Idris (UPSI) in Tanjung Malim, Perak expired on Jan 3.

He has since returned to Busan University of Foreign Studies in South Korea where he heads the Malaysian Studies Department.

According to Dr Kang, his return did not mean the end of his efforts in keeping the Jawi heritage alive.

He had embarked on a journey to preserve Jawi culture in 1974 in Busan, South Korea and continued until his short stint with UPSI.

He returned not because he does not want to stay in Malaysia which he viewed as his second home. But Dr Kang had returned to his homeland with the aim of reviving the knowledge on Malay culture there.

“I want to return to South Korea because right there now the Malay culture that the locals know is going into oblivion when compared with the 1980s and 1990s, especially among the undergraduates who are studying the Malay culture and language,” he told Bernama.

“In fact, many Koreans are learning Bahasa Indonesia and Indonesia’s culture instead.

“This is wrong because despite the many similarities between both sides there are also profound differences that we have to learn. My students have to learn the Melayu Asli (Original Malay) songs, dance the Zapin and write in Jawi if there are to learn of the Malays and Malaysia,” he said with a wide grin.

Dr Kang plans to utilise the good rapport among Busan University, UPSI and DBP to further his cause in ensuring Jawi alphabets does not suffer the fate of many other alphabets that have become extinct.

One of Dr Kang’s earnest effort is to bring a Visiting Professor from UPSI or DBP to serve to his university in South Korea.

And speaking of perpetuating the legacy of the Jawi script, the Malays in the country should see the script in the universal context.

“I see that the Jawi script now is being used by the Malays exclusively in the religious and cultural realm only, why not take it to the universities as the main text of the education there.

“As for me, we should engage with the young students at the universities because these bright people will decide on Malaysia’s future, and if they are aware on Jawi then Jawi’s usage will continue to grow in Malaysia in the future,” he said.

Apart from this, extraordinary initiatives like done by South Korean rapper Psy in popularising the Korean culture through his ‘Gangnam Style’ song should be considered to captivate the world and attract the youngsters.

“Gangnam Style has transformed something ordinary beyond the ordinary. In Malaysia, I believe we can do something extraordinary to revive the use of Jawi scripts,” he said.

Dr Kang noted that he has been working on ‘Jawiology’, to re-introduce Jawi to the world.

“Through this theory I want to explain on the developments of the Jawi script right from the scripts used in the Al-Quran to the ones adapted for use by the Malays. My theory makes Jawi alphabets easily understood by the non-Malays all over the world,” he said. — Bernama