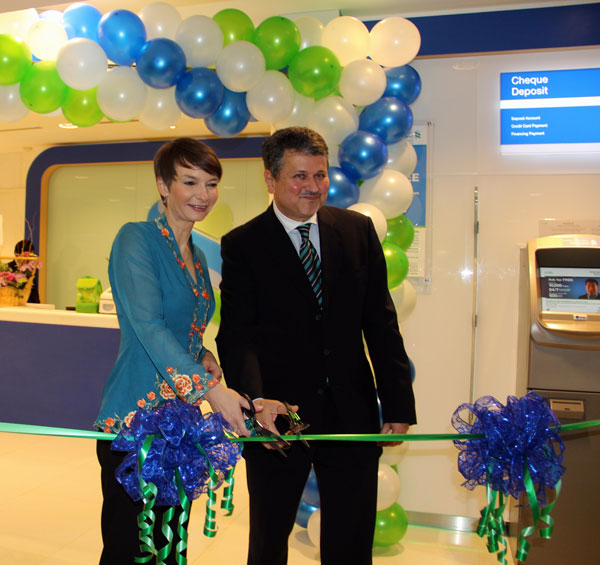 ROBUST GROWTH: Wasim (right) and Wedrychowicz cut the ribbon to officially usher in Saadiq’s first branch in Sarawak, located at tHe Spring Mall.

The maiden Saadiq branch in Sarawak, located in the basement of tHe Spring Mall, was officially opened by Saadiq chief executive officer (CEO) Wasim Saifi and witnessed by Standard Chartered Malaysia consumer banking country head Sonia Wedrychowicz and government officials as well as the bank’s customers, partners and staff.

“This is a very important occasion for us. First, because last week we were awarded Best International Islamic Bank Award at the Euromoney Islamic Finance Awards 2013 and now we are proud to bring to Kuching the best international Islamic bank in its own branch at tHe Spring Mall here.

“The other good news is that we’ve had our soft opening for a couple of months as you all know and I’m so proud to see that the branch has done extremely well,” said Wasim, who is also Standard Chartered global head of Islamic consumer banking.

He pointed that Saadiq, with presence in several geographical regions in the world, had grown to become the only global Islamic banking in operation.

As such, he opined that Euromoney recognised the global reach when it awarded Saadiq the Best International Islamic Bank Award. “For Standard Chartered Saadiq, the entry into Sarawak is the strong commitment of Standard Chartered brand and network into East Malaysia.

“This is our tenth branch, if you look at conventional and Islamic combined, and this shows the importance of East Malaysia for the Standard Chartered group.

“We are proud to bring that entire franchise and all that it offers to Kuching (and Sarawak) to work with us to be part of the Islamic and Standard Chartered Saadiq journey,” he added.

Saadiq stated that the new branch opened seven days a week, extending its operations to weekends in order to improve customer access to the bank’s facilities and services.

“In the past year, Saadiq has Chartered significant growth of 41 per cent in consumer banking revenue. Leveraging on the government’s agenda, as well as the growing popularity of Islamic banking as an alternative, the bank hopes to strengthen its business in Malaysia by increasing reach,” he said.