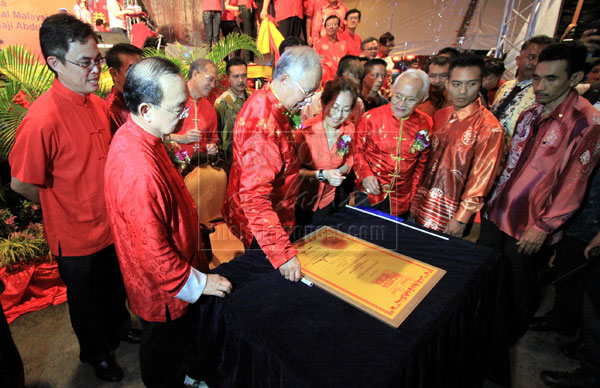 IMPRESSED: Najib (front row, second left), Taib (third right) and other guests looking at the certificate for the new record.

Titled ‘A date with Najib’, the 1,000-table dinner was organised by SUPP. Although the dinner only started at 6.30pm, invited guests started thronging the car park where the event took place as early as 5.30pm.

The diners, including members of the 198 Chinese related associations and non-governmental organisations, were entertained with cultural and singing performances while waiting for the arrival of Najib.

They were also served three dishes prior to the arrival of Najib and his entourage.

Shortly after Najib arrived at the venue at around 8pm, thousands of people joined in to toss ‘yee sang’ simultaneously to rewrite history. Dinner commenced after the speeches delivered by Chin, Taib and Najib.

Apart from entertainment and food, the organiser also surprised the diners with a lucky draw.