Sunday, August 9
You are at:Home»News»Sarawak»Calling for votes on Borneo Jazz, RWMF T-shirt designs 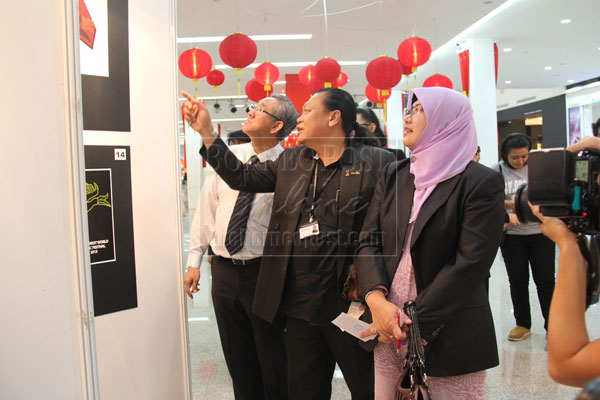 EXCITING: (From left) Sim, Petrus and Rosita admiring a T-shirt design and chat during their tour of the exhibition.

KUCHING: The general public is welcomed to vote for their favourite T-shirt design in conjunction with the upcoming Borneo Jazz and Rainforest World Music Festival (RWMF).

The T-Shirt Design exhibition started at Boulevard shopping mall yesterday and ends tomorrow. It is open for public voting from 10 am to 10pm.

It showcases the final selection of 52 T-shirts designed by students of LimKokWing Borneo campus and Mara Technology University (UiTM).

Those who vote stand a chance to win tickets to Borneo Jazz and RWMF this year.

The winning designer will get a maximum of 10 tickets to the respective music festivals, along with appreciation certificates.

Sarawak Tourism Board (STB), for the third consecutive year, is organising the event to enable international and local university students to showcase their creativities.

The winning designs will be produced as merchandise items for the two iconic music events.

Both festivals bring dazzling performances from across the globe, attracting more than 22,000 international and local festival-goers to Kuching for the RWMF and over 8,000 for Borneo Jazz in Miri last year.

He said the result of the competition should be announced within 10 days after the exhibition.

Sim added that RWMF had been ranked the top 25 music festival internationally by Songlines magazine, a UK based world music magazine, for year 2010, 2011 and 2012. This year the festivals will see 15 international bands performing at the RWMF and eight at Borneo Jazz.

For the month of February, there is an early bird ticket promotion at STB’s website.

This year, there will be a tree planting campaign on May 9 in Miri and on June 27 in Kuching.