Tuesday, February 7
You are at:Home»News»Sarawak»Yong: Be close to people to be effective
For the freshest news, join The Borneo Post's Telegram Channel and The Borneo Post on Newswav. 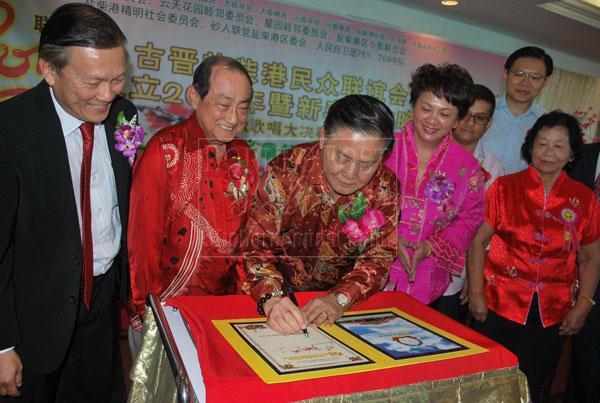 LEAVING A MARK: Yong appends his signature on a special publication of Sungai Maong Community Association as (from left) Giam, Sim, Chai and other guests look on. The book is published in conjunction with the association’s 20th anniversary.

KUCHING: Having close rapport with the local people will help Sungai Maong Community Association to
play a more effective role in attending to the needs of the residents.

Speaking at the association’s 20th anniversary dinner here on Wednesday, he said that close relationship between the association and the local people would make Sungai Maong a better, comfortable and safe place to live in.

“I am glad to see nearly a thousand people at the dinner tonight (Feb 20). It shows that the association is getting more support from the people.

“I hope that you would continue to recruit more members, especially the young people, to strengthen your association,” said Yong, who is also Stampin MP. He also announced a RM10,000 grant to the association.

Datuk Sim Swee Yong, the chairman of the Federation of Community Associations Kuching Division, who spoke earlier, praised the association for playing a part in helping the residents to deal with the flood problem affecting them every year.

“This, however, has greatly been minimised due to cooperation between the association and the government agencies concerned.”

Sim also hoped that other community associations would follow the examples of Sungai Maong Community Association to set up their youth wing.

Among those present at the function were the association chairman Penghulu Giam Ann Kee and organising chairperson Freda Chai.

Previous ArticleThe state of accessible facilities
Next Article Mawan: A number recommended to stand in Saratok