Monday, December 6
You are at:Home»News»Sarawak»2 of 3 thieves nabbed in police ambush 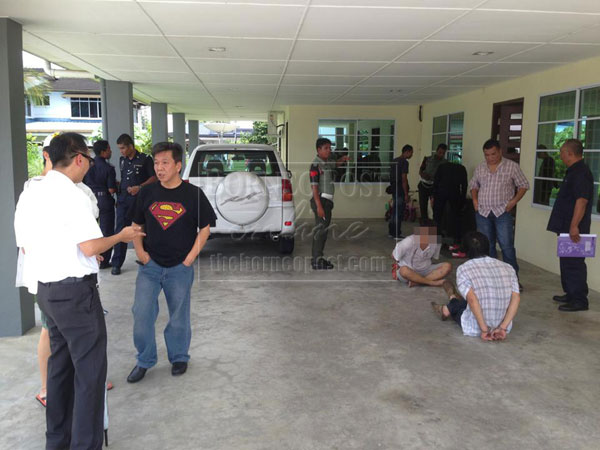 SUCCESSFUL OPERATION: Wong (in T-shirt) talks to a resident while police guard the two suspects after their arrest.

SIBU: Two of the three thieves who repeatedly intruded into an empty house in Lane 3, Delta Estate were arrested after police ambushed them yesterday afternoon.

This is the crime which has shocked the Delta Estate neighbourhood because the daring thieves had kept returning – five times within two days since Monday – before their arrest yesterday afternoon.

A neighbour said the house owner surnamed Wong and his family had migrated to Australia last August and had asked him and their relatives to be caretakers of the house.

The three thieves noticed the house had been left unoccupied.

He said the three had come on two motorcycles and parked their vehicles in front of the house before prising open the gate and front door to
enter.

The desperate caretaker first called DAP leader Oscar Ling yesterday morning for help after which the police were informed, and they rushed a team over.

After combing the ransacked house, the team advised the caretaker to lodge a report so they could launch a full probe.

Just as the caretaker was in the police station lodging the report, the thieves returned to the house.

The police then set a trap and two of the three thieves fell into the long arms of the law.

The police said the three were habitual thieves and drug offenders.

When they were arrested at 1.30pm, police found from one of them three packets of pills suspected to be dangerous drugs.

The police have handed the two over to the Narcotics Department after which the CID team will probe them on the housebreaking.

Neighbours believed the thieves had kept returning to the house because there was a safe inside.

The police found the safe tampered but not opened.

When police surrounded the house yesterday afternoon, the three found they could not escape; one of them hid himself under a mattress in a room on the ground floor.

After some time, he crawled out for fresh air and virtually crawled into the arms of the cop. The other two jumped from a window on the first floor onto the compound of a next-door neighbour.

One managed to slip out while the other ran into the house to hide where policemen swarmed in on him.

When police asked him to get into their vehicle, the thief said he had broken a leg and could not walk, forcing policemen to drag him into the vehicle.

Meanwhile, Pelawan assemblyman David Wong, who was at the scene, praised residents of Delta Estate for their spirit of neighbourliness, saying their cooperation with the police had led to the arrest of the thieves.

“This proves when public members work with the police, crimes are quickly solved.”

Wong thanked the policemen for their prompt action.

He said the desperate neighbour had called him at 1.20pm when the thieves intruded the house for the fifth time.

“I called the police and I rushed over with my assistant Lau Hui Ung. The police also arrived then to lay the ambush.

“Let us continue working with the police to protect our town,” he urged.