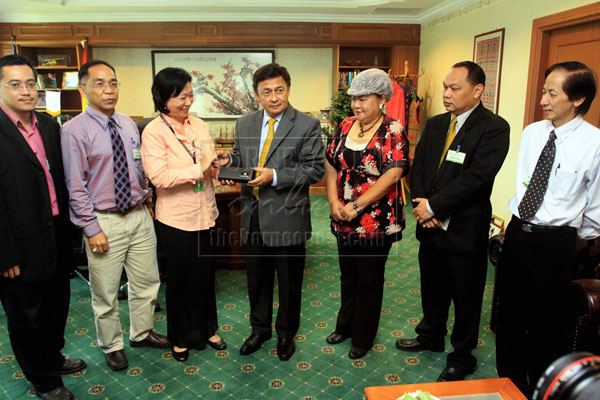 THANK YOU: Caroline (third left) presenting a memento to Mawan while (from left) Bong, Peter, Wee, Churchill and Wong look on. — Photo by Jeffery Mostapa

KUCHING: Any shortcoming in the resettlement exercise of the Bakun hydroelectric project (HEP) must be rectified before the Baram HEP is built to prevent the opposition from turning the issues into political capital.

In making this call, Social Development Minister Tan Sri William Mawan said scare tactics were being used by the opposition in Baram area to oppose the dam project.

“We have not been perfect in the implementation of dams such as the Bakun HEP and they (the opposition) tried to bring over that issue to Baram.

“On the government side, we have to come up with a blueprint on what we should do and not repeat the same mistakes made during the implementation of the project,” Mawan told the media during the courtesy call by Commonwealth Journalists Association (CJA) Sarawak Chapter exco members at his office at Bangunan Baitulmakmur (MASJA) here yesterday.

He also advised elected representatives in these areas to advise the people and listen to them to prevent the opposition from claiming to be their champions.

Mawan who is also president of Sarawak Progressive Democratic Party (SPDP) opined that not all Sarawakians were against the dam projects.

“But at the initial stage, efforts are needed to assure the people who are wary of their construction,” he said.

Mawan was commenting on Pakatan Rakyat’s (PR) manifesto unveiled on Monday which pledged to stop the construction of more dams in Sarawak if it comes to power in the 13th general election.

“They don’t want to go into details for fear of not being able to fulfil their promises as in the 12th general election held in 2008. So they omit specifics,” he said.

The Land Development Minister also stressed that PR’s objection to the construction of the HEP dams “is not based on sound economic rationale but rather based on popular politics,” he said, adding that the state government needed these HEP dams to power its industries.

Parti Pesaka Bumiputera Bersatu (PBB) secretary-general Datuk Dr Stephen Rundi on the other hand said the opposition’s manifesto was quite predictable and full of promises which would be near impossible to fulfil.

“In the past they have failed to honour their manifesto for reason best known to them,” added the Assistant Minister of Public Utilities.