Monday, March 30
You are at:Home»News»Sabah»Deadly shootout in Lahad Datu 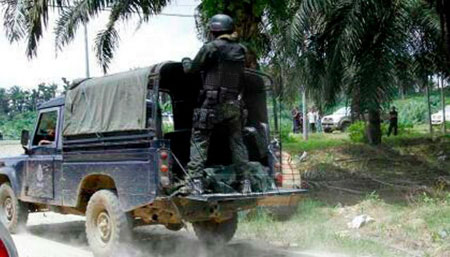 Police vehicle carrying three policemen that were killed in battle with the intruder in Kampung Tanduo. -Bernama photo

LAHAD DATU: All 12 armed intruders from southern Philippines were killed today, when they tried to break out of the cordon imposed by the Malaysian security forces on more than 180 followers of the ‘Sultan of Sulu’.

When they came across a police patrol about 10am at Felda Sahabat 17, Kampung Tanduo, the armed group attacked them, killing two police commandos and injuring three others.

In the ensuing 20-minute shootout, all armed foreigners were killed, said the police.

The stand-off between the security forces and the rebel group continued and the cordon remained intact, Sabah Police Commissioner Datuk Hamza Taib told a press conference this evening. 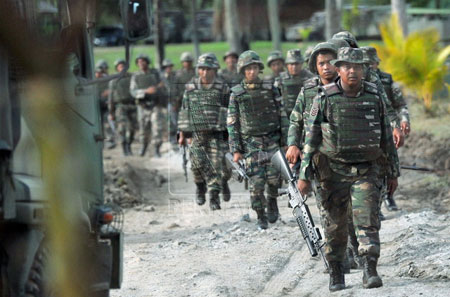 The stand-off is being maintained because Malaysia wants the occupation to be resolved peacefully.

Recalling the incident, Hamza said the foreigners first opened fire at the Malaysian security forces before the police commandos were forced to retaliate in self-defence, followed by a gunbattle, said Hamza.

He said the police found various weapons, including the high-powered M-16 rifles, pistols and SLR rifles, bullets and bags of clothes from the small group.

He said the police had blockaded Kampung Tanduo which was still occupied by members of the group, with security tightened around the area.

“As the police control all routes, it is difficult for the intruders to enter or leave the village area.”

Hamza also denied reports put up in social networks and a foreign news agency that the intruders had given themselves up and escaped by sea.

On this note, he said the police did not issue any curfew order in Lahad Datu, following the incident, adding that the situation in Kampung Tanduo was currently under control and calm. 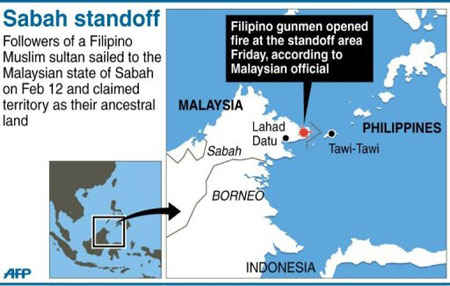 Prime Minister Datuk Seri Najib Tun Razak was reported as saying that he had given the mandate to the inspector-general of police and the armed forces chief to take the necessary action against the group of armed intruders.

He was also reported as saying, the intruders should have accepted the offer to surrender and get out of the area as soon as possible.

Home Minister Datuk Seri Hishammuddin Tun Hussein was also reported as saying that Malaysia had given sufficient time for the intruders to withdraw and return to their homeland.

He said Malaysia had been very accommodating in a series of negotiations and diplomatic moves.

At the media conference, Hamza did not reveal the names of the police commandos killed or injured.

The bodies of the slain policemen were sent to the Lahad Datu Hospital while the two injured police personnel were flown to the hospital. Another was taken to a hospital in Sandakan.

Security forces began blockading Kampung Tanduo on Feb 11, two days after 150 men in army fatigues intruded into Malaysian waters and took over several premises, including houses and a surau in the village, as their base.

Kampung Tanduo, occupied by the group, is located in an isolated area about 130km from Lahad Datu.

The group was allegedly led by Agbimuddin Kiram who claimed they were the Sulu Sultan’s army and demanded that Malaysia recognise Sabah as part of the Sulu Sultanate.

Since then, Malaysia has held a series of negotiations and fixed Feb 22, as the last day for them to leave.

However, Malaysia extended the deadline to Feb 26, while awaiting a Philippine army boat to take them home.

On Monday, Hamza said the police would act based on the country’s laws after taking into consideration several factors to resolve the issue.

He stressed that the police would act within the law to charge the intruders who had been holed up in the area. — Bernama