Thursday, January 27
You are at:Home»News»Sabah»Bodies of two commandos killed in Sabah shootout flown to Subang 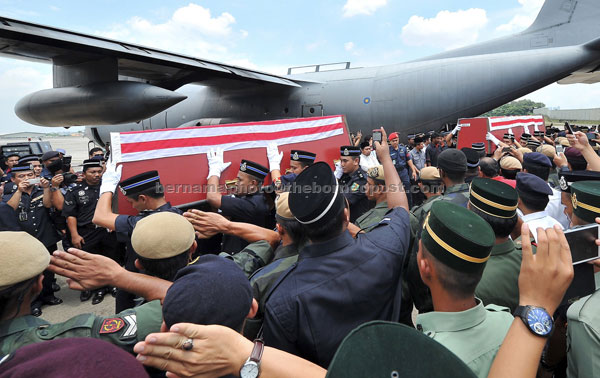 SAD HOME-COMING: Caskets of Sabarudin and Zulkifli being carried out from the military airplane after they arrive at the RMAF airbase at Subang.— Bernama photo

LAHAD DATU, Sabah: The bodies of the two police commandos killed in a shootout by armed intruders claiming to be from the so-called Sulu Sultanate in the Philippines were flown to peninsular Malaysia Saturday.

A Charlie transport aircraft carrying the remains of Insp Zulkifli Mamat, 29, and Cpl Sabarudin Daud, 46, both from the Hulu Kinta Camp of the General Operations Force, took off at 7.55 am from the Tawau airport for the Royal Malaysian Air Force (RMAF) airbase in Subang.

Zulkifli’s widow, Noraziah Noor, and their two sons would accompany the body on the flight from Subang, he added.

Sabarudin’s remains will be buried in his village in Sungai Lias, Sungai Besar, Sabak Bernam, Selangor. He leaves behind wife Nurunisa Abu Bakar and three children – two sons and a daughter.

The funeral prayers for the two dead commandos were held at the Battalion 17 mosque of the General Operations Force here late last night.

Three other commandos – Cpl Mohd Tarmizi Hashim, 32, Cpl Azman Ampong, 39, and Constable Mohamad Qaiyum’aiqal Zolkifli, 22 – were injured in the shootout which occurred yesterday after the intruders had been holed up in Kampung Tanduo, 130km from here, since Feb 9. — Bernama