Monday, May 10
You are at:Home»Business»‘Convergence in global syariah interpretation’ 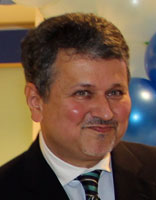 KUCHING: Differences seen in interpretation of syariah compliance among various Islamic finance markets are fast disappearing as there has been rapid inter-market convergence of respective interpretations on a global scale moving forward.

Stating this, the chief executive officer of Standard Chartered Saadiq Bhd (Saadiq) Wasim Saifi noted that there had been a lot of talk in the past about variance between Middle East interpretation of syariah compliance and the interpretation seen in Islamic finance institutions in Malaysia.

“As I see it, in the last two or three years and particularly this year it has become important, and I think that the convergence is happening.

“More and more of the transactions are being structured using Islamic structures which have strong Middle Eastern acceptability as they have local acceptability so most of those structures are coming in.

“Another area where we are beginning to see more and more convergence coming in (which I think it is a very good step) is this whole issue about the syariah-compliant filters announced by the Securities Commission for equities.

“So by the end of the year, the financial filters will start coming in. This again brings it in line with what is happening elsewhere.

“I think with the way the developments are going on, we’re seeing a very strong convergence between Middle Eastern syariah interpretation and Malaysia,” he said, opining that the talk about vast differences in interpretation was quickly disappearing.

Wasim added that with the Malaysian government’s aspiration to grow Islamic banking assets to 40 per cent of the overall assets from the current 23 per cent to 24 per cent, such growth required more qualified people with Islamic academic training and work experience to be able to fuel it.

On a global scale, the Islamic finance market had been seeing impressive double digit growth with Islamic assets held by commercial banks forecast to grow some 40 per cent over the next two years, according to research figures by Ernst & Young.