Monday, February 17
You are at:Home»News»Sarawak»SFC: Difficult to resolve flooding of reserve 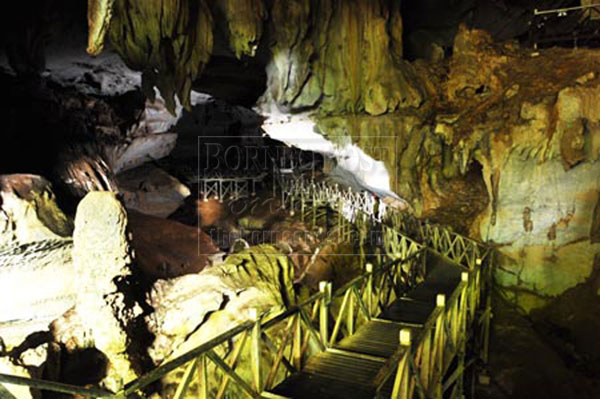 ATTRACTION: A section of Wind Cave’s interior which visitors can explore to experience its wonders.

KUCHING: Sarawak Forestry Corporation (SFC) has no magic plan to prevent flooding of Wind Cave Nature Reserve in Bau which has occurred twice in less than 12 months.

Its Corporate Communications acting manager Elaine Tan told The Borneo Post when contacted that severe weather conditions could be the cause.

Tan said it was difficult to find a specific plan that could resolve the problem as the natural surrounding had to be taken into account.

“Should an interruption occur, we will take the necessary measures such as temporarily closing Wind Cave to allow maintenance,” she said.

But SFC in a statement said Wind Cave, temporarily closed since mid February due to flooding, has reopened to the public.

The cave was closed to allow minor maintenance and repair work on affected facilities.

“The maintenance involved replacing unstable wooden planks on walks leading up to the cliff and cleaning the area,” Tan revealed.

“This is to ensure the area is safe for visitors as their safety remain our priority.”

On visitor volume, Tan said the reserve recorded some 20,000 visitors in the last two years.

“As the reserve is within easy reach from Kuching city, most visitors are locals on a weekend getaway,” she added.

Wind Cave is also famous for its diverse flora and fauna, which makes it a great destination for recreational, educational or research purposes.

Exploring the cave is made easy with a plankwalk though Tan advised visitors to bring torchlights as electric lights installed on some parts along the trail were dim.

“Torchlights are available at the guard house,” she said.

“There are ongoing marketing initiatives between SFC and STB to promote the caves especially on online social networks, our websites and YouTube channels,” she said.

Wind Cave is part of the Bau Formation, a narrow belt of limestone covering 150 sq km of southwest Sarawak.

Due to the soft and soluble nature of limestone and intense tropical rainfall in the region, the whole of Bau Formation is intersected with caves.

Located about an hour’s drive away from Kuching city, the reserve covers 6.16 hectares including the cave and surrounding forest.

The park has regional and global conservation significance due to its extraordinary limestone formations in mystical caverns that are thousands of years old.

Some rock formations resembling figures of animals are of religious significance to some locals.

A unique feature is a cool stream that flows from it. Visitors can swim and relax by the river, as well as explore the cave.

Wind Cave was formed during the Jurassic-Cretaceous period.

Excavations by early explorers such as Beccari in 1865 showed people inhabited Wind Cave until recent times.

Earthenware vessels, charcoal and pieces of marine and freshwater shells have been found, making the nature reserve one of the most important archaeological sites in the world.

Wind Cave charges a nominal entrance fee of RM1 per pax for local visitors and RM5 per pax for foreign visitors in accordance with the National Parks and Natural Reserve Ordinance 1988.