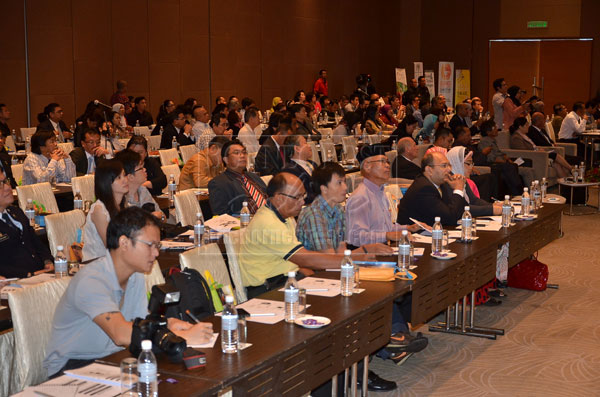 ALL EARS: Some of the state tourism industry players who attended the VMY 2014 briefing and dialogue session yesterday.

“The state and federal governments will pick up momentum along the way by developing more unique and authentic tourism products to cater for foreign tourists,” he said at a `VMY 2014 Briefing and Dialogue with State Tourism Industry Players’ here.

“We will implement effective strategies to entice tourists to stay in the country longer.”

To ensure the success of VMY 2014, Dawos hoped that all stakeholders, including members of the public and non-governmental organisations (NGOs) would give a helping hand.

“Contribute innovative and creative ideas so that we can achieve our objectives.

“We need everyone to be committed and take their roles seriously. We must not forget there’s competition from other Asean countries.”

He thus urged all players to work closely together and share their resources to help push the tourism industry higher.

Using the recent `Chap Goh Mei’ cultural parade at Siniawan, Bau, as an example, Dawos said the crew of China’s broadcasting station (CCTV) was shooting a video there and this was the kind of thing which would benefit the country.

“We are also targeting China as a potential market.”

The Visit Malaysia Year programme had been hosted for three times thus far. The first was in 1990 themed ‘Fascinating Malaysia, Year of Festivals’ which recorded 7.4 million arrivals and yielded RM4.5 billion in receipts.

The second was in 1994 themed ‘Fascinating Malaysia, Naturally More’ which recording 7.2 million arrivals and receipts climbed to RM8.3 billion.

The third was in 2007 to commemorate 50 years of nationhood. Tourist arrivals soared to 20.9 million and receipts totalled RM46.1 billion.

The national target for this year is 26 million tourists.

Previous ArticleThe language of disability
Next Article English to be compulsory pass subject in SPM from 2016, says Muhyiddin