Monday, January 24
You are at:Home»News»Sarawak»Aye for proposed Baram HEP — Jabu 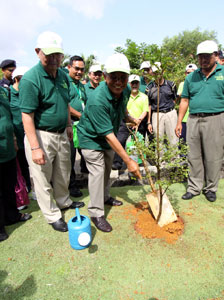 GOING GREEN: Jabu participates in a tree planting programme to support the Green Movement initiative. Chin is on his right. — Photo by Kong Jun Liong

He said the support came about after a dialogue session with Chief Minister Pehin Sri Abdul Taib Mahmud in Miri on Friday.

Jabu, who is also Modernisation of Agriculture Minister and Minister of Rural Development, said those present gave their thumbs up after realising its long-term benefits to their people and the environment.

“All the representatives, including those from Orang Ulu associations, expressed their support for the project because they know that the generation of hydro power involves a system which is in compliance with sustainability and environmentally friendly concepts,” he said at the MyGreen Kuching programme at Le’Park yesterday.

“We (government) could incorporate biotechnological advancements in these projects.”

Jabu assured that all the hydroelectric dam projects in the pipeline would be sustainable in nature, are environmental friendly, and in compliance with environmental impact assessment (EIA).

For the proposed dam in Baram, Jabu said the ministry of rural development and ministry of modernisation of agriculture would initiate a special project to ensure that no pollution will hit river networks at the planned new township and Bandar Baru Telang Usan.

“We want to incorporate a research and development institute for our famous `Ikan Empurau’ as it requires the cleanest of water in its habitat. By empowering the people in the surrounding areas to take care of the rivers and environment, we can promote a more sustainable movement.”

On the MyGreen, which was held in Miri on Jan 9 and Sarikei on Feb 2 respectively, Jabu said the government would continue to educate school children and youths on the importance of protecting the environment, about forest rehabilitation and river cleanliness.

Minister of Energy, Green Technology and Water Datuk Seri Peter Chin, who was also present, said there was a need for the green movement to be participated by everyone in the society.

He said both young and old need to change their mindset and start adopting green living.

The one-day MyGreen carnival is an initiative by Chin’s ministry in collaboration with the Malaysian Green Technology Corporation.

Some 2,500 people attended the event which featured a number of contests for children and activities such as street soccer, street basketball, BMX and skateboarding.

There was also a mini concert by Claudia Geres and Adira of Akademi Fantasia and local cultural troupe Didit Dinai. There were also lucky draws, telematch, and music workshop. The event made a mark in the Malaysia Book of Records when 1,927 people took part in an Iban ‘ngajat’ dance. The previous record only had 1,500 participants.