Tuesday, May 18
You are at:Home»News»Sarawak»Family loses house, properties to fire 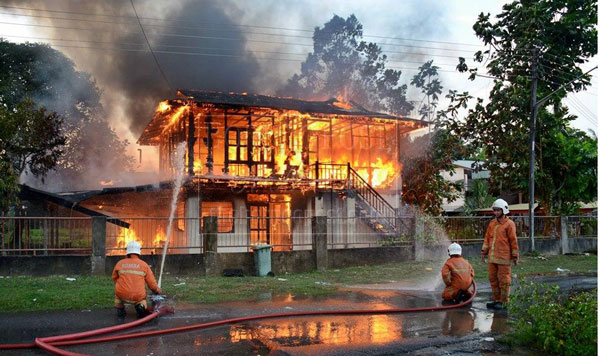 THE BLAZE AT ITS HEIGHT: Fire-fighters dousing the fire.

LIMBANG: A boy’s stubbornness could have resulted in his family being left homeless after fire gutted their house at Taman Pertama Jalan Kubong here on Sunday evening.

In the 6pm incident, the double-storey house was destroyed completely, with the fire taking with it important documents and properties.

According to reliable sources, the incident happened when the delinquent boy was playing with fire in the storeroom.

Incidentally, earlier on, the boy’s mother had warned her eight-year-old son on the danger of playing with fire but he ignored her advice.

Meanwhile, Limbang Fire and Rescue Department chief Anuar Shazad Merdzuki said the fire started at the store room at the ground floor of the house.

“The fire resulted in the victims suffering losses amounting to RM200,000,” he said.

Anuar said he led a team of 12 firemen in three fire engines after receiving a distress call at 6.08pm and the fire was completely doused at 7.50pm.

He advised the public, particularly parents, to monitor their young children and prohibit them from playing with flammable materials.