Tuesday, July 14
You are at:Home»News»Sarawak»Sarawak Tourism Board expects to draw more spectators to Borneo Jazz 2013 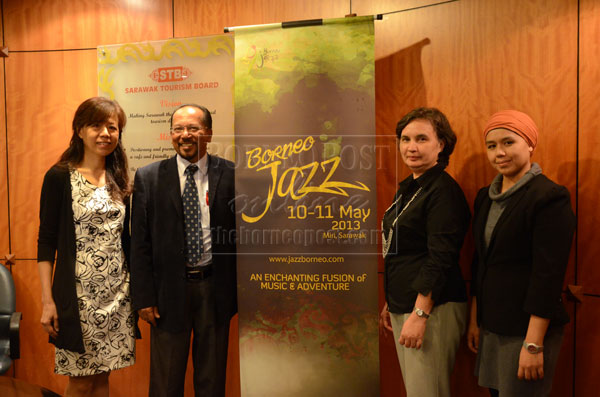 KUCHING: The Borneo Jazz 2013 is targeting to attract 9,000 local and foreign festival-goers to the two-day event which will be held in Miri beginning May 10.

Sarawak Tourism Board (STB) CEO Datuk Rashid Khan assured yesterday that the prestigious festival would be better than last year’s.

“Our ambition is to grow this Jazz Festival into a world class five-star lifestyle event,” he said of the potential of such music festival at the launching of the Borneo Jazz Festival at STB here.

The festival, into its 8th edition this year, will be held at Miri’s Parkcity Everly Hotel.

The Borneo Jazz has grown steadily since its first edition in 2005, from 3,000 spectators eight years ago to over 8,000 last year.

“This growth is a reflection of the successful plan and promotion. It is also a sign of growing appeal of jazz around the region,” he said.

STB, he added, also collaborates with the private sector to design packages to attract visitors not only from neighbouring Brunei and Singapore but also from the region and overseas.

“We want our guests to stay longer. With these travel packages, visitors would be able to attend the festival and at the same time travel to various places of interest within Miri and its surrounding,” he said.

As such, Rashid emphasised that continuous innovation was vital for improvement and to create better value for the products for sustainability which will in turn contribute to more visitor arrivals and better economy.

“Several other cultural elements were added to spice up the event and make it more flavourful. We call it the fringe events comprising the Food Mart, Craft Bazaar, tree planting as well as internship and volunteer programme,” he explained.

“The Craft Bazaar will offer to local craftsmen and artisans a venue to display their handicrafts and arts for sale. We want to allow foreigners to experience our culture besides enjoying music in the resort city,” he said.

Adding on, Rashid said STB would also continue with the internship and volunteer programme as well as the greening initiatives which could reap multiple benefits in order to thrive in the top line.

“Both programmes, undertaken as part of our Corporate Social Responsibility (CSR), were very well accepted. The internship programme offers unique experience for international volunteers and interns whilst at the same time exposing them to Sarawak’s product, culture, nature and adventure,” he said.

“Also, this is another step towards bringing the festival to the international stage,” he added.

The green initiative, on the other hand, with a tree planting ceremony will be held at the Curtin University, Sarawak Campus. In five years’ time, Rashid hopes to move the festival to a bigger theme and make it more commercially viable.

“We want to make it into one of Malaysia’s best musical festivals besides its sister festival, the Rainforest World Music Festival, and geared to be among the region’s best weekend music outing,” he added.

Meanwhile, the project’s artistic director Yeoh Jun Lin revealed yesterday that an eclectic line-up of eight regionally and internationally recognised jazz musicians will be playing a diverse range of jazz genres at the festival over the two nights.

“Our very own West Jazz Band will also be part of the festival where they will play fusion jazz and everything from Swing to Latin to electrifying funk jazz music,” she said.

Other international acts confirmed for the Borneo Jazz this year include the energetic spicy groovy funk group from Germany, Mo’Blow; Hazmat Modine from the East-Coast of USA, the energetic and toe-tapping music by Jump4Joy from Sweden, the Acapella jazz group called The Nylons from Canada, the Asian Jazz All Stars Power Quarter comprising members from Singapore, Hong Kong, the Philippines and Thailand as well as the Scott Martin Latin Soul Band from West-Coast of USA.

Another highlight from the international acts would be the award winning Lisa Young Quartet (Bell Award’s ‘Best Australian Jazz Vocal Album 2007’) who is well known to jazz and world music listeners as an ensemble of creative improvisers incorporating Indian and African elements in their work.

Those interested can purchase the tickets online at www.jazzborneo.com or www.ticketcharge.com.my