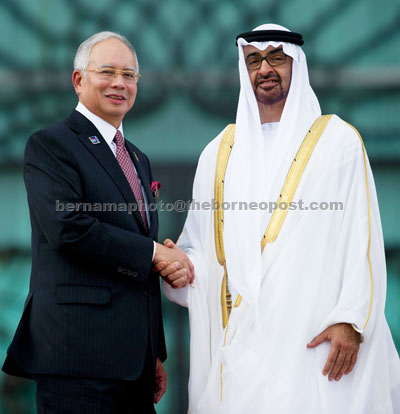 PUTRAJAYA: Malaysia and the United Arab Emirates (UAE) yesterday agreed to establish a RM18 billion Aabar-1MDB strategic partnership to focus on making sustainable investments in important high-impact projects and for Abu Dhabi to set up a RM21 billion crude oil and petroleum storage facility off the coast of Tanjung Piai in Johor.

He said the multi-billion project signified a vote of confidence in the strength and long-term stability of Malaysia and its economy, and the growing partnership between the two countries.

He said while other parts of the world remained in economic doldrums, Malaysia’s economy was roaring ahead, enjoying robust growth, low unemployment, low inflation and sustainable debt level.

“With the projects such as those announced today, which will create hundreds of thousands of well-paying new jobs for Malaysians, we can be assured that our country is well on the way to becoming a developed nation by 2020,” said Najib before he and the visiting Crown Prince of Abu Dhabi, General Sheikh Mohammed Zayed Al Nahyan, witnessed the signing ceremony for the initiatives.

The Crown Prince, who is also Deputy Supreme Commander of the UAE Armed Forces, is here on an official visit to Malaysia at the invitation of Najib.

Earlier, the Crown Prince had a “four-eyed” meeting with Najib.

Najib said during the extensive and fruitful discussions, ranging from bilateral relations to cooperation in trade and investment, both leaders agreed that there was huge potential for greater collaborations.

He said both countries should identify areas where they could work together to create tangible benefits for the two nations.

He said the UAE was Malaysia’s most important trading partner in the Gulf region, with trade in the 11 months last year touching RM24.8 billion, up 18 per cent than in 2011.

Meanwhile, the 1MDB said the RM18 billion strategic partnership to promote new economic initiatives will spur billions of ringgit in the long-term sustainable investments in Malaysia.

Separately, Abu Dhabi is moving ahead to provide the required capital for the multi-billion ringgit Tun Razak Exchange (TRX) development, making it the first major multinational anchor investor for the new growth nucleus, it said in a statement.

The 1MDB is the master developer of the TRX project, the national initiative to spur growth in new areas and lead the way for Kuala Lumpur to be a global centre for international finance, trade and services; while Abu Dhabi’s Aabar Investment PJS (Aabar) is the strategic investment company controlled via Abu Dhabi state-owned International Petroleum Investment Companies (IPIC).

Meanwhile, Abu Dhabi has entered into a partnership with 1MY Strategic Oil Terminal Sdn Bhd (1MY) to jointly establish a long-term crude oli and petroleum storage facility on a 1,000 acre land to be reclaimed off the coast of Tanjung Piai.

The facility will be designed, built, operated and maintained for the exclusive use of Abu Dhabi and it will function as Abu Dhabi’s Strategic Petroleum Reserve.

Sheikh Mohammed Zayed, in his speech, said the initiatives will contribute a great chance for both countries to build a wider and bigger collaborations.

“Today’s meeting gives a good opportunity for dialogues and exchange of ideas and it is an important step to tackle a number of bilateral issues in the existing field of cooperation,” he said.

The Crown Prince expressed his appreciation for the sincere effort and constructive role played by the Malaysian government towards building a better future for both countries.

“Malaysia’s experience in development is very unique and of high standard. I wish there will be more great success for Malaysia and its people,” he added. — Bernama