Wednesday, February 1
You are at:Home»News»Sabah»No escape for Azzimudie
For the freshest news, join The Borneo Post's Telegram Channel and The Borneo Post on Newswav. 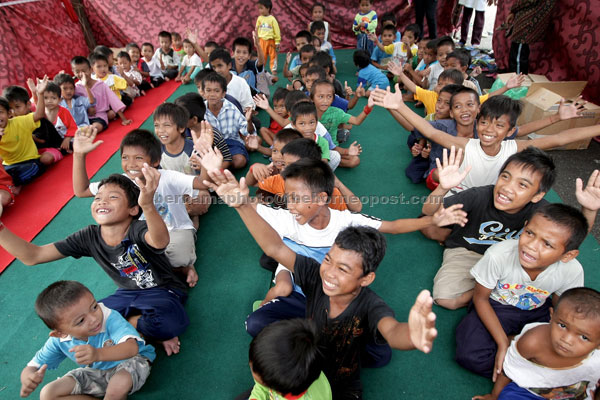 HAVING FUN: Children evacuated from Kampung Sungai Merah having a great time at Cenderawasih Civic Centre which serves as their temporary home near Felda Sahabat oil palm plantation. — Bernama photo

LAHAD DATU: The police will press for Sulu terrorist chief Azzimudie Kiram or Agbimuddin to be extradited from the Philippines to face prosecution in Malaysia, says Sabah Police Commissioner Datuk Hamza Taib.

He said Azzimudie, as mentioned by Inspector-General of Police Tan Sri Ismail Omar, had led the Sulu intrusion in Lahad Datu and was now believed to be back in the Philippines.

“Even if he is there (in the Philippines), we do not face any problem because we have undertaken an investigation under the Security Offences (Special Measures) Act 2012 against those under detention.

“We will compile the evidence and use the legal channel to have Azzimudie extradited to face charges in our country,” he told a news conference at Felda Sahabat plantation, near here yesterday.

Ismail and Chief of Defence Forces Gen Tan Sri Zulkifeli Mohd Zin, at a news conference in Kota Kinabalu Friday, said Azzimudie is believed to have fled to the Philippines.

“He has abandoned his men and fled to his homeland,” said Zulkifeli.

Intelligence reports indicated that he slipped away during a raid on the small village – Kampung Pinggir Bakau – by security forces last Sunday morning.

During the raid a total of 33 suspects were detained, among them four women who are believed to be very close to Azzimudie.

It was reported that the terrorists’ leader abandoned his men and slipped off in the middle of the commotion.

The disclosure by Zulkifeli has prompted authorities in the Philippines to investigate the whereabouts of Azzimudie and some of his men in Simunul, his home village in Tawi-Tawi.

The Philippine has also deployed more troops to Tawi-Tawi to question members of the self-proclaimed Royal Army of Sulu if they were to return from Sabah but they would not be treated as criminals as long as they do not carry firearms and peacefully cooperate with authorities.

However, his family has denied that Azzimudie had escaped from Sabah and abandoned his men.

Kiram family spokesperson Abraham Idjirani said the claim of the Malaysian Armed Forces chief that he already left his men in Sabah was merely ‘propaganda’ against the self-proclaimed Sulu Sultan Jamalul Kiram’s followers.

He added that if Azzimudie had indeed returned to the Philippine, he should have been arrested by Philippine authorities already.

Meanwhile, when interviewed by the police Azzimudie’s wife said she had not seen him or had been in contact with him since the fighting started in Sabah.