Sunday, November 29
You are at:Home»Features»Sungei Sarawak as a tourist draw

TRICKLING down from a small stream in Upper Kapuas Range, Sungei Sarawak meanders through Kuching city, bisecting it into two zones – South and North — and ends its long winding journey to the sea some 120km away at Muara Tebas.

GOOD FOR A CRUISE: Cruising up and down Sungei Sarawak can be a relaxing and enjoyable experience for Kuching folk.

About two centuries ago, the first white Rajah, Sir James Brooke, set up an early settlement opposite two populated Malay Kampungs — Boyan and Surabaya — on the left bank of the river as his administrative centre.

Since then, that part of the river had figured prominently in the life of the early settlers, contributing in no small measure to the birth of downtown Kuching.

Apart from Main Bazaar (1864), the historical significance of Sungei Sarawak is exemplified by the heritage buildings along its banks such as the old State Mosque (1847), the Astana (1870), the Old Court House (1874), Fort Margharita (1879), Brooke Dockyard (1912) and Chinese Museum (1912), not forgetting Kampung Boyan and Kampung Surabaya which provided a vibrant hub for village life on the left bank as early as 1860. 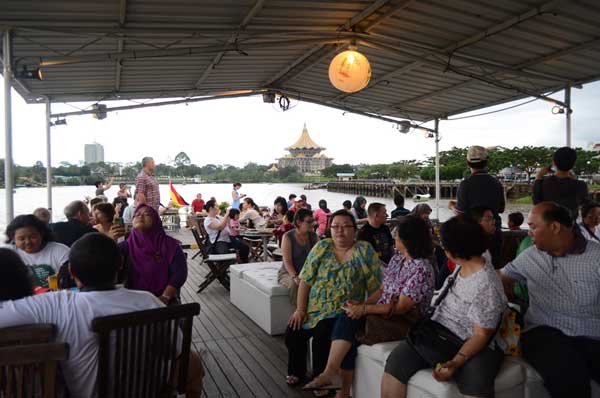 With its natural beauty and historical sigificance, Sungei Sarawak’s potential as a tourist attraction has never been overlooked by the authorities.

A beautifully designed 1km waterfront walkway was declared open in 1993 and later extended to about 2km, making it not only a “must visit” tourist spot but also a leisure family hangout for locals, especially in the late afternoon and evening.

To fully tap the river’s tourist potential, the Sarawak Rivers Board (SRB) has endorsed a masterplan to enhance regulations and develop river transport along the 24km zone between Batu Kawa and the Borneo Convention Centre Kuching (BCCK).

SRB is envisaging the expansion of river transport along this stretch as a viable public conveyance alternative to reduce road traffic congestion which is getting worse by the day.

Apart from overseeing the status of rivers, wharfs and vessels, including usage, transport and charges, SRB is also responsible for passenger safety, regulating vessel types plying or crossing the river, standardising fares and ensuring better service from river-going crafts.

The first mode of river transport SRB has been dealing with is the tambang, a permanent feature of Sungei Sarawak.

Though the oldest river-crossing transport around, the tambang is still relevant today.

The cheap 40-cent fare has made this quaint-looking boat a tourist attraction in its own right, ferrying not only the kampung folk across the river but tourists as well.

This small wooden rivercraft — with a triangular-shaped (sometime flat) roof and a plank cover on both sides with a small window at the front or back of it – has become so popular among tourists that it has become an icon of Sungei Sarawak.

It is paddled manually or driven by a small outboard engine and can seat up to seven or eight persons.

Like strolling along the Kuching Waterfront and looking for a bargain at Main Bazaar, taking a tambang across river has become a not-to-be-missed experience for visitors. Despite their no-frills operation, all the tambangs are registered with SRB for regulatory and safety purposes.

And though only a few tambangs are seen crossing the river at a time, SRB has actually given out 118 licences to cover the 24km stretch of the river.

SRB controller William Jinep told thesundaypost tambang operators who worked 18 hours a day, had organised themselves to provide service at different times of the day — and night.

“All the tambangs are registered with us. This means not only are they insured but also their passengers (automatically) once they buy their tickets,” he explained.

Besides the tambangs, there are also big motor vessels such as the Equatorial which has been providing dinner and cultural shows, especially for tourists, during a river cruise.

In recent years, the increase in tourists had also given rise to river taxis for medium-distance cruise along the 24km waterway.

“The tambangs come in more or less similar size. The cruise boats, on the other hand, are big capital investments due to their tonnage.

“As for the river taxis, they are very popular and can be easily spotted, so they cannot operate without catching the attention of SRB.

“What we need to monitor now is the mushrooming river taxis – all in just three short years,” William said. 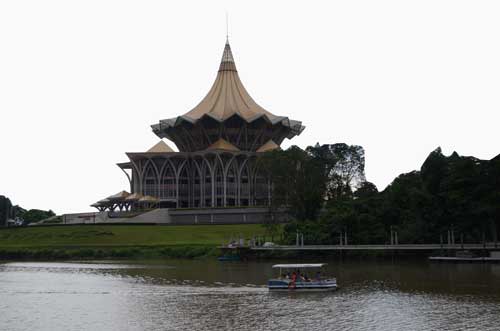 PROMINENT: One of the most imposing features along Sungei Sarawak is the State Assembly Complex opened in July, 2009.

River taxis come in all shapes and sizes and they may also operate at any hours.

SRB has to ensure these vessels are suitable for rivercruise in terms of design and capacity. For passenger safety, SRB must see to it that life jackets are provided on board.

As of March 1 this year, 18 rivercruise companies have registered with SRB and most operate river taxis offering medium-distance cruise, primarily targetting tourists.

With a big jump in the number of rivercruise operators, SRB has also tried to standardise fares to prevent cut-throat competition which can lead to unfair over-charging of the public and tourists.

“Actually, we fix the fares based on the principle that the amount is low enough for passengers to pay but high enough to allow operators to make a profit without cutting cost to compromise on safety,” William explained.

In fact, SRB has fixed the fares for all commercial vessels operating in the 34 rivers in Sarawak, including the tambangs.

For example, the fare for a short river crossing from Kampung Boyan to the Waterfront is fixed at 40 cents.

A river taxi cruise, on the other hand, costs RM25. The furthest point upstream for a river taxi cruise is the Satok Bridge while downstream, it’s Kampung Puloh at Bintawa. A cruise lasts one hour.

Due to increasing river traffic, SRB has drawn up guidelines for the different class of vessels to avoid unfair competition which could otherwise lead to conflict among the operators.

SRB’s masterplan includes the provision of new wharves or jetties where riverine vessels can berth or let their passengers disembark, and the maintenance of these facilities. 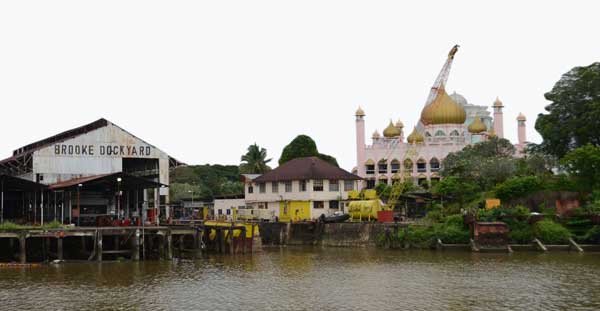 GLIMPSES OF THE PAST: The old State Mosque and the Brooke Dockyard are some of the historical buildings along Sungei Sarawak.

Believing that convenience is important for both operators and passengers alike, SRB has been building multi-purpose jetties along the river banks.

The first such jetty is at Niaga Medan Satok whose opening has been well-received by tourists and river taxi operators.

“Going to the one-stop market takes only 15 minutes. We give tourists half an hour to shop before ferrying them back. The trip allows them to enjoy the riverview and shopping at Niaga Medan Satok where a wide range of goods are on sale,” William said.

Sarawak River Taxi owner Mohd Abdul Rahman Adenan chipped in: “Now, not only tourists are making the trip to Niaga Medan Satok — even locals are doing that. With more passengers, we are doing much better. Business in now more viable.”

Following the success of the Niaga Medan Satok jetty, more multi-purpose ones are sprouting up along the 24km stretch of Sungei Sarawak. New facilities already completed include the BCCK Jetty and the Kampung Panjang Jetty.

“Due to the busy river-crossings since the early days, many small jetties have been built along the river for use by the tambangs.

“These jetties have been upgraded to make them more presentable and user-friendly,” William said.

He pointed out that the recently built multi-purpose jetties were different, being equipped not only to handle bigger riverine vessels but also for other purposes like doubling as a native market.

“Usually near these jetties, there is either a tourist attaction such as historical building or a landmark which may be of interest to tourists. This is SRB’s latest plan for Sungei Sarawak.

“In future, a trip can even be extended to longer hours as there will be more activities or places of interest at every multi-purpose jetty,” William added.

SRB’s ultimate aim is to upgrade the 24km stretch of Sungei Sarawak to the level of the Thames of London or the Seine of Paris.

Sungei Sarawak is more than just a tourist attraction. With proper development and maintenance, this waterway can be an embodiement of Sarawak’s history, culture and heritage of which every Sarawakian can be proud.