Thursday, June 24
You are at:Home»News»Court»84 subpoenaed to testify at bank manager’s murder trial 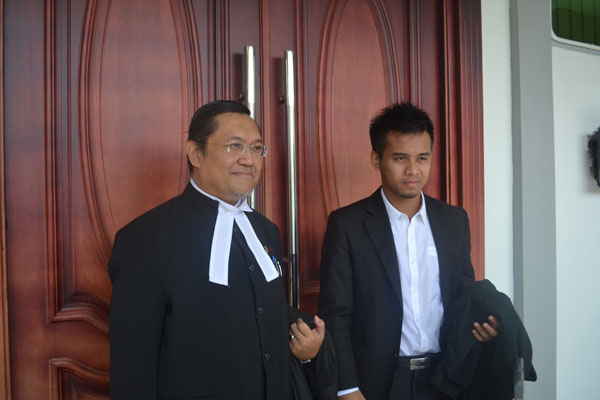 READY FOR THE TRIAL: Awang Armadajaya (left) and Azul at the High Court after attending to the case.

SIBU: A total of 84 witnesses have been subpoenaed by the prosecution to testify at the trial of a woman and two men

charged with the murder of bank manager Stephen Wong in June last year.

Senior Federal Counsel Awang Armadajaya told reporters at the High Court yesterday that out of the number, his side would call 30. The trial is scheduled for June 17 to July 5.

Awang Armadajaya is to be assisted by DPP Mohd Azul Fardz.

Currently, the High Court has to attend to five part-heard capital cases as well as a Native Customary Rights (NCR) case.

Ling Hang Tsyr, 31, her male friend Tiong King Guan, 26, and Ling Hoe Ing, 24, had pleaded not guilty to all the charges.

Tiong faces an additional three charges under Section 115 of the Penal Code for abetment, an offence punishable with death, or imprisonment for life.

According to press reports, police found Wong’s body in a pool of blood in the master bedroom of his house at Ulu Sungai Merah Road at 1.30am on June 14 last year. The 31-year-old had slash wounds on his neck and had been stabbed in the chest and stomach.

He also sustained defensive wounds on both arms.

His wife and their three-year-old son were in the house when the murder occurred.

Hang Tsyr told police she woke up upon hearing her husband struggle with an intruder who fled when she switched on the lights.

Previous ArticleLynas: End of the road for 10 Balok residents
Next Article MP: BN responds to needs of the people