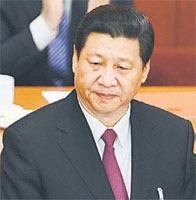 BEIJING: New leader Xi Jinping has urged China to pursue the ‘Chinese dream’ but experts say behind the grandiose words, he is single-minded in his aim to bolster Communist Party rule.

The president faces myriad challenges from pollution and graft to territorial spats, unsteady growth in the world’s number two economy, and widespread inequality bringing the threat of social unrest.

Xi, named as president last week by the National People’s Congress (NPC), called for “the continued realisation of the great renaissance of the Chinese nation and the Chinese dream” in his first speech as head of state on Sunday.

At the close of China’s rubber-stamp parliament, he laid out a vision of a stronger military and ever-higher living standards following the once-in-a-decade leadership transition that also installed a new premier, Li Keqiang.

Xi’s ‘Chinese dream’ concept is itself an effort to “redefine the purpose of the party, so that there is a greater sense of the party being united with the people”, said David Zweig, a professor at Hong Kong University of Science and Technology.

Like all leaders since Deng Xiaoping, Xi agrees on the need for China to press ahead with economic reforms pursued since the old command-style communist system began to be disbanded in 1978, spurring an historic economic boom.

Since November, when he took over the reins as party chief from Hu Jintao, Xi has proclaimed the need to fight growing corruption which threatens, in his own words, to “kill the party” that has ruled China since 1949.

But despite the threat of corruption and protests about social and environmental issues, Itothe Communist Party appears unwilling to countenance political reforms.

Xi’s over-riding priority, said Steve Tsang, an expert in Chinese politics at Britain’s University of Nottingham, is “whatever it takes to keep the show on, the party in power and (make) China more powerful and influential”.

“They will be trying to project a clear image and message to the country in China that they are tackling the big issues like corruption, like government abuse of power.”

Scott Harold, a China expert at the Rand Corporation in the United States, said: “If you look at Xi Jinping there are reasons to think that he believes that now China is a great power and China has to act like a great power.”

But the outlook for social reforms, for which a consensus apparently has yet to be reached among top leaders, remains unclear.

Hints appeared in state media after Xi took over as party chief that significant changes could be in the offing, such as an end to China’s notorious “re-education” labour camps, but the message was later rolled back and in the event no firm announcements were made. — AFP