Monday, January 30
You are at:Home»Columns»Breaking Barriers»Unstoppable Fariz
For the freshest news, join The Borneo Post's Telegram Channel and The Borneo Post on Newswav. 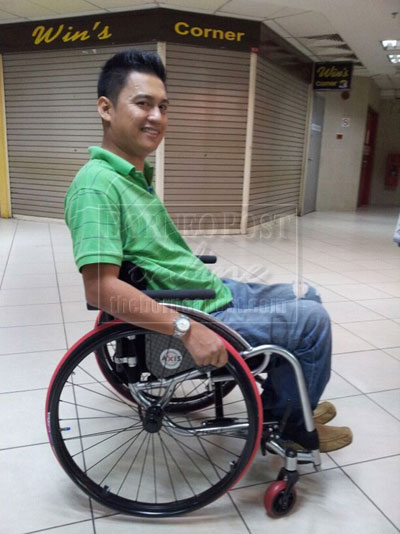 INSPIRATIONAL: Fariz aims to get a PhD in disability studies and publish a book to share his experience.

WHEN faced with devastating life-changing situations, many of us wished we could turn back the clock. We wished we could have done it differently, led a healthier lifestyle or avoided that split second before a horrific accident.

The reality is that there is no turning back in life. Time marches on regardless. We have to move forward and make the best out of the prevailing circumstances, or get left behind. Some retreat from society, unable to accept the tragedies that have befallen them, while others pick up the pieces swiftly and move on in life.

This was what happened to Fariz Abdul Rani after an accident in 1998. Hailing from Kota Kinabalu, he was a first year physics student at Universiti Kebangsaan Malaysia in Bangi when fate dealt him a cruel blow.

The motorcycle that he was riding pillion on skidded. He was flung off and landed on the side of the road. The impact from the helmet hitting the ground severely injured his neck. His spine was fractured at the fifth and seventh cervical vertebra.

Fariz and I got acquainted recently at a Disability Equality Training (DET) course that we both attended. We worked very closely together for two weeks. As I got to know him better, I was impressed by how fast he had climbed up from the depths of his shattering injury to become a successful entrepreneur, and more.

His injury level is similar to mine. He lost the functional use of his arms and legs after the accident. Fortunately, he regained the use of his hands after three months of intensive therapy and is very independent in his activities of daily living.

After he was discharged from the hospital, he went back to live with his parents in Sabah. He spent most of his time at home watching television, chatting online and listening to music. That became his routine as he struggled to come to terms with his impairments.

At one point in time, he really wished he could turn back time as he saw his friends enjoying their teenage years while he was confined to his wheelchair in the house. He wished that he had not ridden pillion on the bike that fateful day. After three long years, he finally decided that there was more to life than just going through the same routine day in and day out. He got a job as an administrative officer in a company specialising in prosthetics where he worked diligently for seven years.

In 2007, Fariz attended the Disability Equality Training (DET) course organised by the Welfare Department and Japanese International Cooperation Agency (Jica) in Kuala Lumpur. He has since conducted DET workshops for the Kota Kinabalu City Hall, Ministry of Transport and many other organisations.

At the same time, he established an advocacy group called Young Voices Sabah under the auspices of the Leonard Cheshire Disability Global Alliance. This group consists of young disabled persons speaking out on disability and development issues, and human rights, among others.

Through the advocacy activities of Young Voices Sabah, many disabled persons became more aware of their rights to full participation in society. It was that time that Fariz noted many of them were unemployed although they were capable.

With that in mind, he established JB Prosthetic and Rehab Supply in 2009 and recruited disabled persons to work for him. The company supplies artificial limbs and rehabilitation equipment. The other reason for setting up such a company was also because he wanted disabled persons to use better quality assistive devices to further enhance their independence.

Never one to rest on his laurels, Fariz co-facilitated a two-week DET workshop in Jordan with Dr Kenji Kuno of Jica in October last year. According to him, it was a good learning experience but also very challenging due to the language and cultural barriers that are totally different from Malaysia.

Nevertheless, disabled persons in Jordan have the same aspirations as disabled persons everywhere else. They too want to live in an inclusive society free from discrimination and systemic barriers. Through the DET workshop, they now have a better understanding of what they need to do to move towards that direction.

Fariz obtained his certification as a senior trainer for DET early this year. That was where we first met and then became good friends. There are four senior trainers in Malaysia. He is the only senior trainer in Sabah. The other three senior trainers, including myself, are based in the Klang Valley.

When asked what he wants to achieve in life, Fariz — who is 33 years old now — said that he wants to get a PhD in disability studies and publish a book to share his experience with other disabled persons. He is currently pursuing a Bachelor of Psychology with Open University Malaysia as the first step towards realising that ambition.

He is gratified to see that the advocacy activities have borne fruit. The DET workshops that he conducted have changed the mindset of the authorities in Kota Kinabalu as more and more public facilities are being made accessible. This is good news for disabled persons who always had to contend with countless physical barriers every time they went out.

From spending three years in a wheelchair doing the mundane, he has risen back up to become a role model to other disabled persons, an agent of change to make society more inclusive and a successful businessman. That is something many people can only dream of doing.

It has not been easy for Fariz to get to where he is today. He certainly has come a long way since that tragic day in 1998. He has triumphed over his impairments and lived up to the adage that tough times never last but tough people do.