Saturday, June 19
You are at:Home»Features»Protected wildlife on the menu 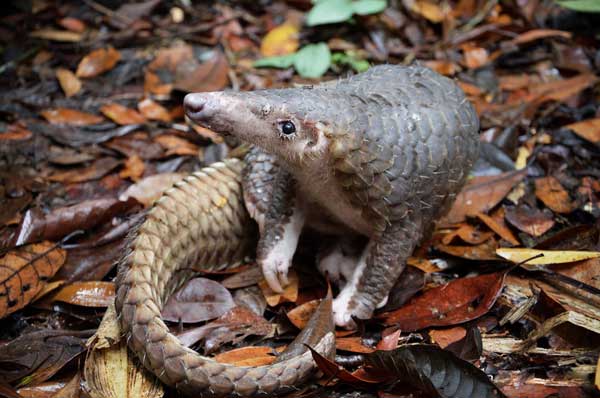 FAVOURITE PREY: A pangolin can easily end up as a dish on the dinner table. It is considered ‘clean food’ as its main diet is ants.

UNDER the law, protected wildlife should be not be kept, sold or consumed.

Yet, there is no lack of restaurants offering ‘exotic’ wildlife dishes – and one need not drive very far to get a taste of these ‘forbidden’ foods.

Many eateries in and around the state capital are serving ‘wildlife specials’ prepared from the meat of river terrapins, wild boars, frogs and flying foxes.

In upcountry towns like Bau and Lundu, these gastronomic taboos can also be found except that they do not appear on the menu.

As it’s against the law to sell or eat protected wildlife, their meat is usually available after office hours (when wildlife protection officers are not on duty). Furthermore most restaurants offer such dishes only to their ‘best’ customers.

The ‘hot spots’ are more prevalent along the border such as in Serian and Serikin. Other such areas include riverine towns such as Kapit, Song and Selangau which are nearer the (wildlife) source, according SFC operation manager (Security and Assets Protection Divisions) Mohamad Jirin Anis.

As of March 21, SFC, acting on public tip-offs, have made surprise checks on 25 premises, five of which were found to be displaying wild boar, python and labi-labi meat for sale.

Jirin said on the same date, five cases, involving the sale of wild life meat, were detected – plus another four where derivative parts such as spines or quills of porcupines were put up for sale.

Jirin said one of the difficulties encountered in eradicating the illegal trade was that by the time the enforcement officers reached the selling premises, the culprits would just disappear “into the thin air.”

Not one would own up as to who were responsible for the wildlife remains left behind. 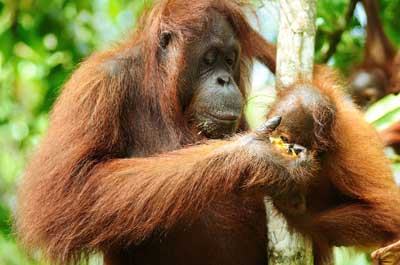 PROTECTED: Hunting the orang utan is strictly prohibited in Sarawak. 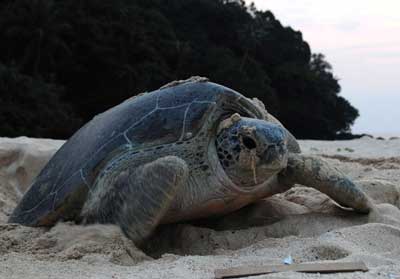 ENDANGERED; A green turtle nesting at Talang Besar. Its eggs are considered an exotic delicacy by many. 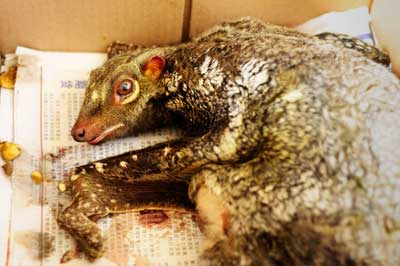 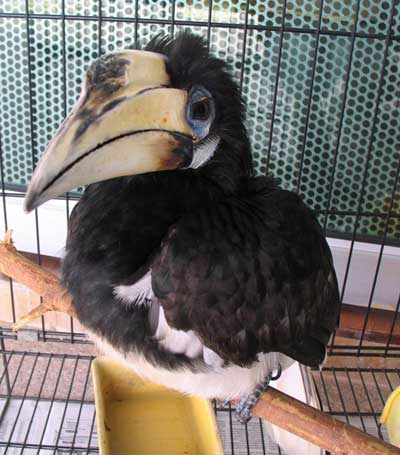 PROTECTED AS WELL:
The black-piped hornbill is another protected species. 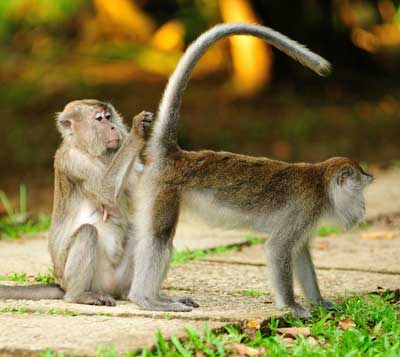 PARK RESIDENTS: The long-tailed macaques can be spotted at Bako National Park.

The problem is not confined only to wildlife meat. Protected species like eagles, mynas and parakeets are also being sold – at RM250 each – before bargaining at Serikin and a plastic bag of nine turtle eggs costs RM10.

There are also demands for certain “exotic” wildlife parts or derivatives such as the phallus. For example, a crocodile penis can be bought for RM250.

However, SFC senior manager (Protected Areas & Biodiversity Conservation Division) Oswald Braken Tisen, questioned the genuineness of most of such derivatives which people believe can give their libido an extra boost.

He related a recent case where the public tipped off SFC on a drug stall selling “bear gall bladders.”

The products were confiscated and found to be fakes after testing.

“There are penile parts of wild animals sold for RM30,000. In most cases, they are not genuine,” Braken pointed out.

He found it quite puzzling that there were people willing to pay so much for some “exotic food” which has not been proven scientifically to be effective in enhancing health.

Since these so-called “exotic” wildlife parts might be phony, what’s even worse is that the substance used to fake their authenticity is usually not known and could be detrimental to health. 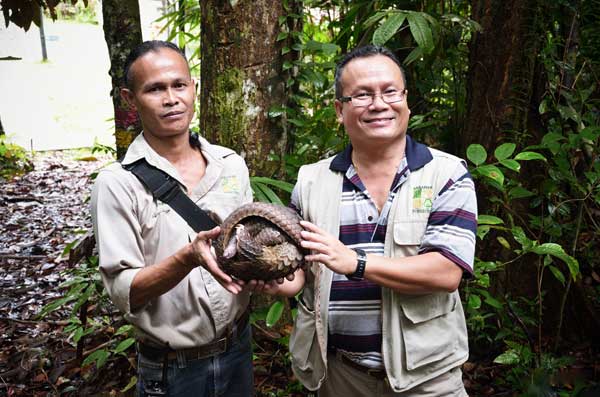 THIS IS PROTECTED: Braken (right) holding a pangolin together with a field staff.

Apart from imitation animal parts, SFC has also uncovered wildlife meats not fit for consumption as they have been soaked in preservatives to make them “look fresh.”

“Usually, wildlife hunting is done deep in the jungle. An animal cut open within an hour after being killed will attract flies. So by the time the meat reaches the market, it has already attracted swarms of flies.

“There are times when wildlife meats found in the market appear very fresh – without a single fly on them. In most cases, they have already been saturated with preservatives,” Braken explained.

To him, the best way to protect wildlife – endangered or on the verge of extinction – is stop buying their meat. Why risk running foul of the law. Moreover, there is no scientific proof that eating wildlife meat, especially those hyped as exotic and special, is healthful. On the contrary, it could lead to long-term health problems.

Citing an example, he said the cholestrol in turtle eggs has been found to be nine times more than that of chicken eggs. So regular consumption of turtle eggs can cause the problem of high cholestrol and reverse the longevity everyone yearns for.

“If the turtles were living in waters polluted with heavy metals such as mercury, the toxins will get into their systems and finally into their eggs through the food they eat. So anyone consuming these eggs will also be taking in the mercury.”

Hunting wild animals for food is a culture of Sarawak natives. Though most of them have adapted to modern ways, there are some groups such as the Penans still relying on wild animals as the main source of protein.

As such, it is permissible for them to possess the meat of animals listed under the “restricted” category. These are wildlife which are protected but breeding in large number such as the wild boars. However, the meat to be taken should not exceed five kgs under the Wild Life Protection Ordinance 1998 (Amendment 2003).

Whosoever flout this regulation will be presumed as having the intention to sell the meat! The seller can be fined RM5,000 while the buyer RM2,000 under the Trade Ban Section of the Ordinance.

Also, under the Ordinance, any person who hunts, kills, captures, sells, offers for sale or claims to be offering for sale, imports and exports, or is in possession of any totally protected animal (and protected animal) or any recognisable part or derivative or any nest thereof, shall be guilty of an offence. 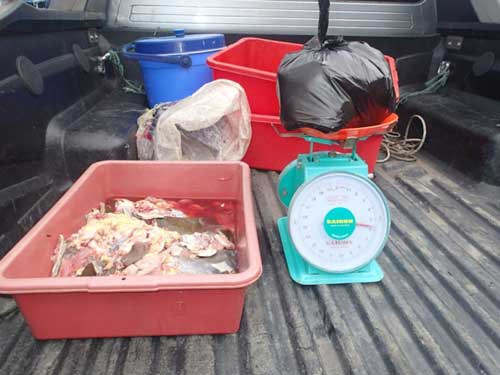 NOT ALLOWED: Sale of turtle meat. 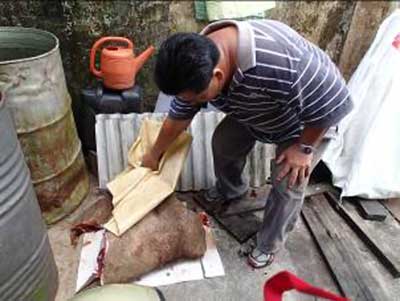 WILD BOAR MEAT SEIZED: A member of the raiding team
uncovering wild boar meat at the unmanned stall not far from a Kanowit jetty. The meat was later seized by the team.

Other penalties:
(a) Two years’ jail and RM25,000 fine for totally protected animals or plants such as the gibbon, leaf-monkey, wild cattle, clouded leopard, bay cat, marbled cat and flat-headed cat, slow loris, tarsier, all types of hornbills and turtles.
(b) One year’s jail and RM10,000 fine for bear, bear cat, crocodile and monitor lizard, cobra, python, labi-labi, flyng lemur, flying fox, flying squirrel, pig-tailded and long-tailed macaque, all owls and hill mynas, procupine and pangolin which are under the category of protected animals.

The most common offence of buying and selling of wild boar, labi-labi, barking deer and flying fox falls under trade ban of the same Ordinance. However, it does not include meats from a licensed wildlife farm sold by a licensed trader.

“The whole society has to work together to stop any illegal sale of wildlife meat. If there is no demand, then there will be no market,” Braken said.

He pointed out that harsh punishment only served as a short-term deterrent. He believed raising awareness through education was the answer to the problem of illegal wildlife poaching, hunting as well as selling of wildlife meats or their parts.