Saturday, August 15
You are at:Home»News»Sarawak»Larry for Lubok Antu 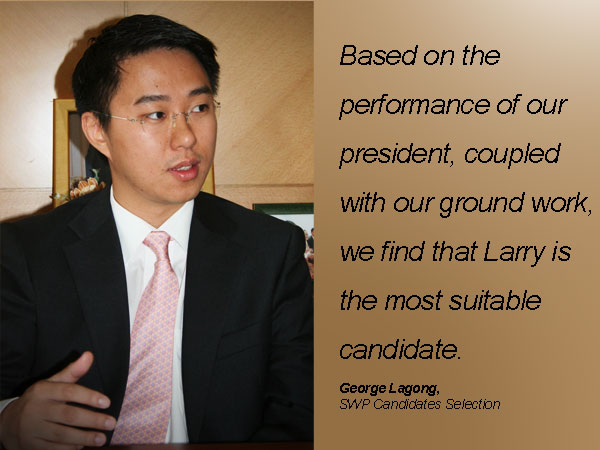 This was revealed by SWP’s Candidates Selection Committee chairman George Lagong during a press conference at SWP headquarters here yesterday.

George, who is also SWP deputy president, said Sng was deemed the most suitable candidate based on feedback gathered.

“Based on the performance of our president, coupled with our ground work, we find that Larry is the most suitable candidate to represent SWP in Lubok Antu in GE13.”

George claimed that the year-old SWP currently had more than 9,000 members in Lubok Antu. He estimated that the constituency has about 21,000 registered voters.

On `non local’ and `non Dayak’ issues raised in recent weeks with regards to Sng’s potential candidacy in Lubok Antu, George opined that such arguments were not valid as Malaysia is a multiracial country.

“Last night (Sunday) we launched our 50th independence within Malaysia celebration. The pillar of our independence is unity. So, I see no reason why the younger generation of this independent country do not abide with this form of (multiracial) unity.

“We cannot be racist if we wanted to maintain the independence and stability of this country.”

With this latest announcement, SWP has now unveiled the identity of three of its six candidates.

The other two are Meluan assemblyman Wong Judat for Julau and George himself in Hulu Rajang.