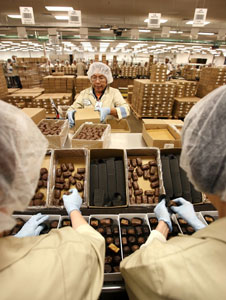 According to AmResearch Sdn Bhd (AmResearch) in a recent research note, the manufacturer of various confectioneries and soft drinks was said to have its earnings driven by an increase in sales of fruit gummy and hard candy.

“More importantly, Cocoaland is well-positioned to ride on new lines, which will translate into the introduction of new products, such as liquid-filled hard candy and gummy as well as alleviate supply constraint,” the research firm further highlighted.

One particular merchandise licence agreement was inked earlier this year for the Angry Bird trademark.

The research firm explained, “As part of the franchise business model, Cocoaland has recently inked a merchandise licence agreement with Ravio Entertainment Ltd for the trademark of Angry Bird for fruit gummy, hard candy and pudding.”

As part of the agreement, the minimum guarantee in revenue was said to be at RM2 million per annum with a royalty fee of 7.2 per cent.

As such, it opined that the Angry Bird hard candy, which was expected to begin sales in the second quarter of the financial year 2013 (2QFY13) via its domestic distribution network, had an estimated gross profit margin at approximately 40 per cent.

Additionally, AmResearch noted, “Given the group’s intention to focus on promoting the Angry Bird hard candy at this juncture and the complexity involved in the creation of an Angry Bird mould, management highlighted that the Angry Bird fruit gummy and pudding are likely to only kick-in earliest in FY14 forecast (FY14F).”

Overall, the research firm expected Cocoaland’s earnings would grow at a robust compounded annual growth rate of 13 per cent over the next three years, from RM23 million in FY13F to RM31 million in FY15F, following a high earnings base from FY11 onwards.

However, it cautioned that earnings could be potentially weighed down by minimum wage scheme, which in turn could be translated to additional staff costs of approximately RM2 million, and a one-time commissioning cost arising from new fruit gummy lines to be incurred in FY13.

The research firm therefore derived the fair value at a lower RM2.80 per share compared with RM3 per share previously, based on its discount cash flow valuation following an earnings fine-tuning.