Tuesday, January 21
You are at:Home»News»Sarawak»The wait is over, Najib announces dissolution of parliament *video! 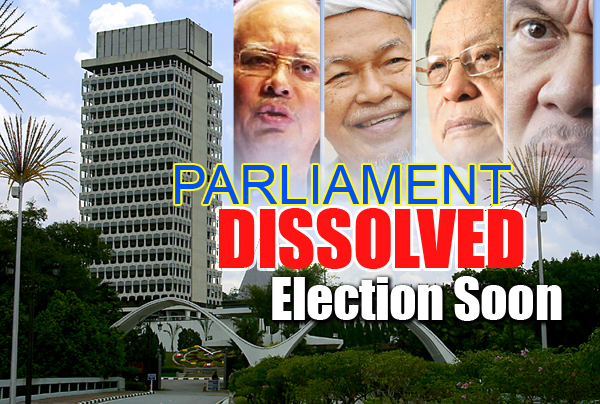 POLITICAL parties are like prize fighters warming up in the dressing room whereas political pundits resemble ringside commentators, running out of opinions and conjectures but constantly looking, as they always do, for fresh angles and something new to say as they wait for the big fight that never seems to start.

Today, Prime Minister Datuk Seri Najib Tun Razak has finally rung the bell – it’s time to rumble and what a fight the 13th General Elections promise to be.

If the drama and vitriol emanating from both sides of the political divide in the protracted build-up to polling day were taken as a measure of its intensity, then the election this time around will be the mother of all elections in the nation’s history.

GE13 is the acid test of Najib’s leadership in the Barisan Nasional and his political career hinges on how much ground – lost in the last general elections on March 8 2008 – could be clawed back from the opposition by the ruling coalition.

In what the opposition gloated as a political tsunami, BN lost its two-thirds majority, winning only 140 out of the 222 seats in parliament.

BN traditional strongholds such as Selangor, Penang, Kedah and Perak all fell to opposition parties under the umbrella of Pakatan Rakyat (PR) while Kelantan remained an opposition bastion through Parti Islam SeMalaysia (Pas).

The devastating results of GE12 shortened the term of former premier Tun Abdullah Ahmad Badawi as Umno members, backbone of the national BN, called for an immediate change in the top leadership.

Bowing to intense pressure, Abdullah did not seek re-election for Umno presidency but instead appointed his deputy Najib as his successor. Najib who won the party’s presidential elections unopposed in 2008, was sworn in as the nation’s sixth prime minister on April 3, 2009.

Taking over from his predecessor without going through the litmus test of a general election, the GE13 will be a baptism of fire for Najib.

The prime minister has been working very hard in preparing for his first “title defence” through his 1Malaysia transformation programmes and aid packages to the poor.

While these efforts have boosted his popularity and BN’s chances in this election, they are not without hiccups and loopholes, drawing both approvals and criticisms from the people. The jury is still out on the effectiveness of Najib’s initiatives in rallying the people behind BN as the verdict will only be delivered after all the votes are counted.

With so much scrutiny on Najib’s leadership in BN, it is easy to forget that the opposition too are under intense pressure, especially in states where they are presenting their “report cards” for the first time.

How will the voters judge them?

It has not been plain sailing for all PR-held states since they came into power in 2008 and the opposition group have been beset with squabbles over seats, different views on key issues and controversies and internal power struggles within their component parties.

In the opposition-ruled states, the roles have been reversed with DAP, PKR and PAS finding themselves in the firing line. They were asked to explain a host of issues by BN backbenchers and, at times, found themselves on the backfoot, fending off accusations and demands to explain the actions they have taken.

Will the PR state governments in Penang, Selangor, Kedah and Kelantan survive GE13?

While the ground battle in the campaigning period will be fierce, the temperature in the cyber confrontation, which has been raging all this while, is expected to rise even more from its already red hot intensity.

With the social media, online news portals and radio stations dominating the political debates, the winners of GE13 could be decided by battles in the cyber theatre and over the airwaves.

The simmering political confrontation has now broken out into full-scale war but hopefully, after the dust has settled, Malaysians will bury the hatchet and allow the newly-elected government to get down to the business of running the nation.

Previous ArticlePM to address nation over live television at 11.30am
Next Article PM dissolves parliament for 13th General Election *latest!