Friday, July 10
You are at:Home»News»Nation»Najib starts off race to Putrajaya 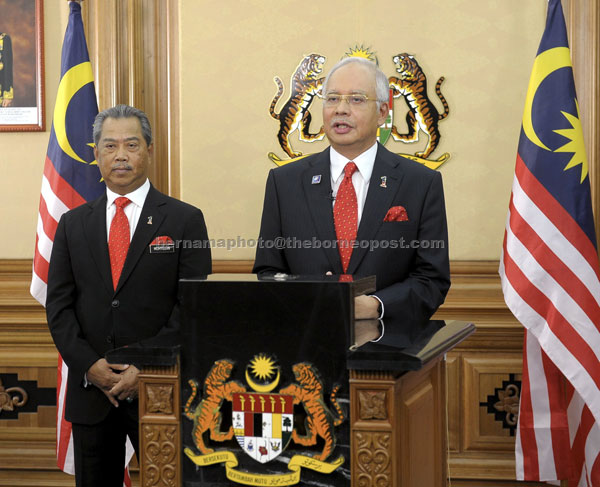 The long awaited announcement was made at his office at the Perdana Putra Building in Putrajaya and was carried live over all major radio and television stations at 11.30 am.

The dissolution of the Dewan Rakyat coincides with the fourth anniversary of the date of his taking over the post of prime minister from Tun Abdullah Ahmad Badawi.

Deputy Prime Minister Tan Sri Muhyiddin Yassin and other members of his Cabinet, were also present during the announcement. The male members of the Cabinet were attired in dark suit and wore a red tie.

Najib said the Yang di-Pertuan Agong, Tuanku Abdul Halim Mua’adzam Shah, who he had an audience with yesterday morning at Istana Negara, gave the consent for the dissolution of the Dewan Rakyat.

In his 13-minute address, Najib expressed his appreciation to Malaysians for having placed their trust in the Barisan Nasional (BN) government to helm the country over the past five years.

“I and my colleagues very much appreciate and uphold your trust. We have given our best for Malaysia and its citizens,” he said.

The prime minister said that over the past four years, Malaysians had seen and experienced for themselves how the national transformation had improved the people’s well-being and national prosperity.

Najib said the government he led was a responsible government which placed the interests of the people above everything else.

“We are a government which fulfilled promises and cherished the trust placed in us.

“Ours was not the way of engaging in sweet talk. Our commitment can be evaluated and gauged from our performance and track record over the past four years,” he said.

Najib said he and his fellow BN leaders would begin to go down to the ground to meet the people all over the country to convince them why the BN should be given the opportunity to form the next government with a strong majority.

“We will use the strong mandate given, God willing, to redouble our efforts to chart a better, more meaningful and more prosperous future for all of you and your children and grandchildren,” he said.

The prime minister also reminded the people to exercise their responsibility as voters and not waste their chance to elect a government that would uphold the people’s aspirations.

“Every one of your votes is important. Do not waste them. Do not gamble away the future of your children and the country.

“Think wisely before making a decision because your votes will determine not only the direction of the country and the states but also the destiny of our children and grandchildren,” he said.

The prime minister advised the heads of state governments to have an audience with the heads of the states to seek the dissolution of their respective state legislative assemblies.

He said this was to enable the holding of the elections simultaneously throughout the country.

There are 222 parliamentary seats to be contested with BN holding 135 seats 75 under the opposition front Pakatan Rakta PR. There are 12 independents. — Bernama