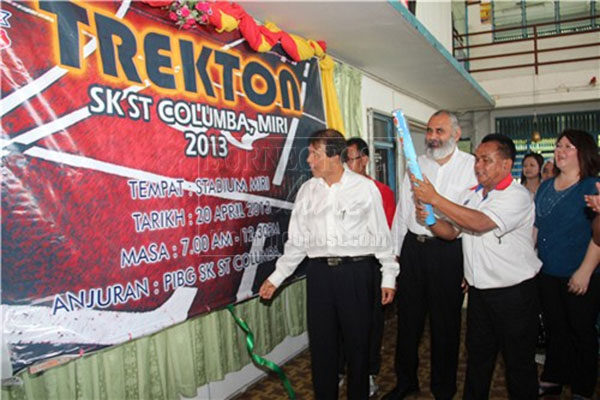 STRIKING: Ting (left) unveils the Trekton poster, witnessed by (from second left) Karambir, James and others. 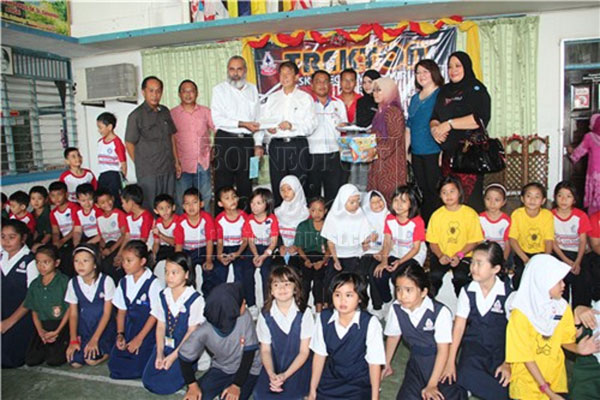 THANK YOU: Karambir (left) receives a RM5,000 donation from Sebastian on behalf of the Trekthon committee.

MIRI: Members of the public are invited to support a fundraising ‘Trekton’ to be held at Miri Stadium from 7.30pm on April 20.

The event is organised by the Parent-Teacher Association (PTA) of SK St Columba here.

According to the PTA chairman Karambir Singh, Trekton is a variation of the joggerthon where students raise money by running around the stadium’s track which is much safer compared to roads heavy with traffic.

He appealed to parents of students, members of the public and past students to donate to the cause.

“The funds raised is to purchase teaching materials, equipment and creative learning tools for the children,” he said.

Karambir added that SK St Columba Miri have always been cooperative, supportive and aware of the school’s needs to ensure quality education and facilities for children.

“The PTA has always supported headmaster James Nibong and his teaching staff besides the school’s board of management,” he said.

Karambir said SK St Columba is an aided school which is old but prestigious.

“Some of its facilities are being repaired and upgraded. However, there is a shortage of classrooms.

“It is indeed fortunate that with the support of our leaders the school has been given a new plot of land for its extension. With the completion of the new block, the school will have enough rooms to hold single sessions,” he said.

He hopes for public support as the school is one of the oldest landmarks of Miri City.

Political Secretary to the Minister of Energy, Green Technology and Water, Datuk Sebastian Ting officiated at the launch of the Trekthon yesterday.

During the ceremony, Ting presented a RM5,000 cheque for the project to the organising committee.

He also helped facilitate the application for funds to upgrade the infrastructure of SK St Columba.