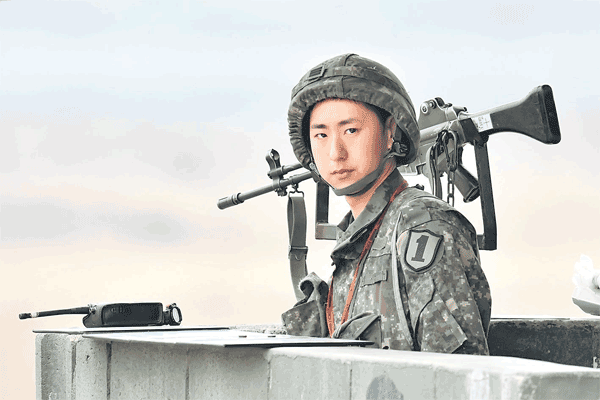 ON GUARD: A South Korean soldier stands on a military guard post near the demilitarised zone (DMZ) dividing the two Koreas in the border city of Paju. — AFP photo

SEOUL: North Korea has moved a second mid-range missile to its east coast and loaded both on mobile launchers, a report said yesterday, fuelling fears of an imminent firing that will further ramp up tensions.

The Defence Ministry, which on Thursday had confirmed the movement of one missile with “considerable range”, declined to comment on the new report.

It was the latest incremental move by North Korea which, incensed at fresh UN sanctions and South Korea-US military drills, has issued a series of apocalyptic threats of nuclear war in recent weeks.

The Musudan has never been tested, but is believed to have a range of around 3,000 kilometres, which could theoretically be pushed to 4,000 with a light payload.

That would cover any target in South Korea and Japan, and possibly even reach US military bases located on the Pacific island of Guam.

The official told Yonhap that the mobile launchers had since been hidden in special underground facilities.

“The North is apparently intent on firing the missiles without prior warning,” the official said.

The Pentagon has said it will send missile-interceptor batteries to protect its bases on Guam, a US territory some 3,380 kilometres southeast of North Korea and home to 6,000 American military personnel.

Most experts think the North is not yet capable of mounting a nuclear device on a ballistic missile which could strike US bases or territory.

On Thursday the North Korean army said it had received final approval for military action, possibly involving nuclear weapons, against the threat posed by US B-52 and B-2 stealth bombers participating in joint military drills with South Korea.

“The moment of explosion is approaching fast,” the army’s general staff said.

The blistering rhetoric has stoked international concern, with UN chief Ban Ki-moon describing the daily threats from Pyongyang as “really alarming and troubling”.

“I think they have gone too far in their rhetoric and I am concerned that if by any misjudgement, by any miscalculations … this will have very serious implications,” Ban said.

US Defence Secretary Chuck Hagel has said the threat levels combined with the North’s military capabilities represented a “real and clear danger” to the United States and its allies South Korea and Japan.

There has been speculation that Pyongyang might schedule a firing to coincide with the birthday of the country’s late founder Kim Il-Sung in mid-April.

A provocative missile test-fired into the sea over Japan is one scenario that analysts have said the North could choose to exit the crisis with a face-saving show of force.

“A flight test would make sense. But I’d be surprised if they used an untested missile.” said Daniel Pinkston, a North Korea expert at the International Crisis Group.

“But I’d be surprised if they used an untested missile.

At this stage in the game, they don’t want to be firing off something that might disintegrate after 30 seconds,” Pinkston told AFP. — AFP