Barisan Nasional ups the tempo with a manifesto for all 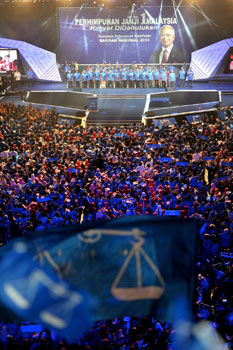 KUALA LUMPUR: With three days left to the fixing of nomination and polling dates for the 13th General Election, Prime Minister Datuk Seri Najib Tun Razak went to the people last night with the Barisan Nasional (BN) manifesto pledging that no Malaysian will be left behind by the coalition, should it be returned to power.

The event was significant on two counts – it was the first time the BN has launched its general election manifesto, well before nomination day, and in a departure from the norm, the 31-page document lists a whole slate of commitments, projects and programmes.

Inside the Putra Indoor Stadium here packed with BN supporters, he spoke of his hopes for the nation, including the young, backed by the full complement of leaders of BN component parties and states ruled by the coalition.

In seeking a mandate from the people to lead the next government, Najib also presented his report card on what had been achieved by his administration over the past four years that adds credibility to his ability to fulfil all the commitments contained in the manifesto.

In the morning, he was in Kuantan to launch the Armed Forces Open Day at the Royal Malaysian Air Force Base where he slammed opposition political parties for attempting to undermine and demoralise the police and security forces when they were thwarting the Lahad Datu terrorist intrusion.

He made clear that the government’s transformation agenda was incumbent upon a well-guarded nation.

He also asked the people to compare the BN manifesto with that of the opposition.

“The BN manifesto is an agreement between the BN and the people that will bring about much more prosperity, development and progress, particularly as the next five years are crucial for us to achieve the developed nation status,” he said.

Amid the attention on the Gelang Patah parliamentary seat in Johor to be contested by DAP veteran leader Lim Kit Siang, Menteri Besar Datuk Abdul Ghani Othman, touted as the BN challenger there, said it was Najib who would decide. — Bernama

1. A need for strong government 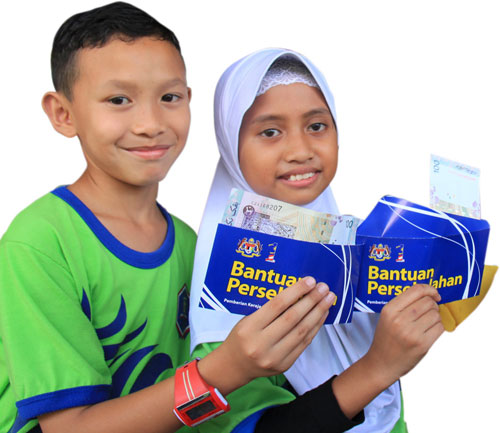 Easing the Cost of Living

-Increasing BR1M to RM1,200 per household, book vouchers and schooling aid payments.
-An automotive policy that will gradually reduce car prices by 20 per cent to 30 per cent and make the national cars more competitive.
-Lowering broadband charges by at least 20 per cent with guaranteed bandwidth.
-A host of consumer-oriented measures to help ease the cost of living.

-Greater focus on dealing with the pronounced urban shift, including creating a new ministry and providing quality public housing.

-Quality healthcare for every Malaysian
-Discounted prices for specific medication for Malaysians with special needs.
-Palliative home care for the aged and terminally ill.

-Setting up special courts with the same status as High Courts under the present justice system whereby judges will be assisted by accessors chosen from among community heads to deal specifically with NCR issues.
-Gazetting all native customary land in close consultation with state governments.
-Provide more income-generating opportunities for the indigenous communities.

Towards Greater Efficiency in Public Transportation

-Expansion of the highway network including constructing 2,300km of Pan-Borneo Highway.
-Building 2,500km paved roads in Sabah and 2,800km in Sarawak.
-Expanding electricity supply to another 60,000 homes in Sabah and 80,000 in Sarawak
-Compelling service providers to ensure quality mobile phone service and reliable wireless access.
-Implementing the 21st Century Village concept to spur rural transformation and bring the rural community into the mainstream of development.

A Global Movement of Moderates

-Seek a seat on the UN Security Council so that Malaysia can play a prominent role in regional peace and international security through the government’s policy of moderation.

-Improving access to quality education for the rural and minority communities especially in Sabah and Sarawak
-Improving the education system so that it is among the best globally.
-Developing further the thinking skills of students, enhancing performance in mathematics and science studies and making English a compulsory pass for SPM.

-Programmes to nurture quality leadership and creativity among youths.

-Have greater women’s participation in the national decision-making process.

-Bring about a police omnipresence so that people feel safer and more secure.

-Upholding Islam as the religion of the Federation.
-Ensuring that other religions can be practised in peace and harmony.
-Appoint a minister to deal with non-Muslim matters.

Fighting the Scourge of Corruption

-Public disclosure of contracts to enhance transparency in government procurement.
-Compelling MPs and state assemblymen to sign the integrity pact.

-Ensuring a fair mix of all races in the civil service and government-linked companies.
-Improve the quality of the civil service through, among others, talent development.
-Expand the urban transformation centres to all major cities and towns.

-Create 3.3 million new jobs, of which two million will be in high-income sectors.
-Work towards achieving a per capita income of RM45,000 by 2020.
-Implement a transformation programme for small and medium enterprises.
-Reform the tax structure that is more broad-based and gradually cut personal and corporate tax.
-Enhance the effectiveness of the Bumiputera agenda by having a stronger support system and creating more business opportunities.
-Having policies that are fair and equitable to all races.