Thursday, June 4
You are at:Home»News»Sarawak»Unimas undertaking study on hornbills 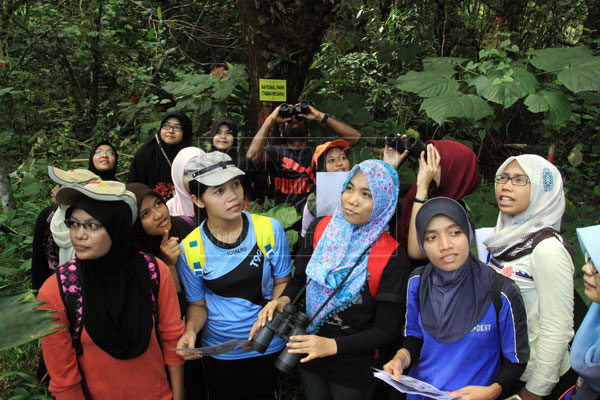 BIRD WATCHING: Unimas students looking for birds which could be found at the Santubong area while keeping a close eye on hornbills. — Photo by Jeffery Mostapa

KUCHING: Universiti Malaysia Sarawak (Unimas) is leading a study to shed light on the habitat and population of hornbills in and around Santubong.

Led by its Department of Zoology in collaboration with Sarawak Forestry Corporation and Permai Rainforest Resort, the study will also gauge locals’ perception on the conservation of hornbills.

“The hornbill is synonymous with Sarawak but it is sad to say that not many people are aware of their population and ways to conserve them,” said Unimas’ head of Zoology Department, from the Faculty of Resource Science and Technology, Dr Azlan Azad, at Permai Rainforest Resort yesterday.

He added that hornbills are listed as a totally protected species in the country.

Sixty-nine students are involved in the study. They will talk to both locals and non-locals at Kampung Santubong, Kampung Buntal, Kampung Sungai Lumut and Kampung Salak and jot down their level of interest and knowledge about the conservation of hornbills via a set of questionnaires. Azlan said these students were also expected to conduct census and point surveys according to topographic grids to identify and tabulate bird species and population within the area under study.

“The students will have to record a species’ character, such as what type of food they eat, how high they perch on a tree, and when are they most active.”

The information gathered, said Dr Azlan, would be useful to the park’s management in terms of habitat and wildlife conservation.

“Once the information is properly tabulated, it could also be used for the tourism sector, where park guides can bring tourists to see the different wildlife in their natural habitat at a time when they are most likely to be spotted.”

Azlan said this study is a debut effort by Unimas and could be the start of more such studies on wildlife in other parts of the state.

“Everything is still at a preliminary level. We are also considering setting up infrared cameras around Santubong area to capture images of species which are near extinction.”

“It is important for a resort like ours to have a set of plans for better management.”

Rahim added that the last study on hornbills around Santubong was conducted some five years ago.

“We know that tourists arriving in Sarawak want to experience nature and wildlife.  This makes it important for us to protect them.

“When people are given the chance to see first hand these rare species at their natural habitat, they will have a better appreciation of nature.”