Monday, February 17
You are at:Home»News»Sarawak»Rescue at sea after phone call 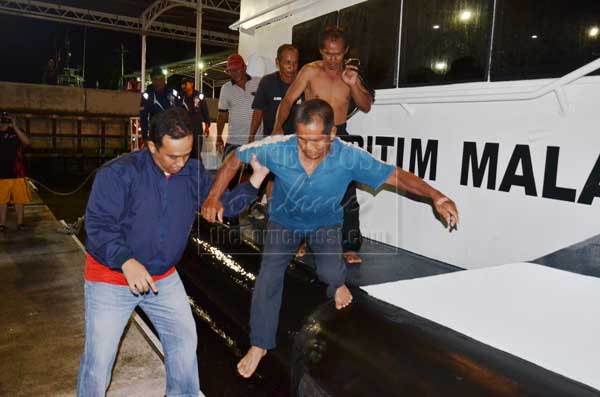 SAFE AND SOUND: The rescued fishermen disembarking from the MMEA vessel upon arriving at MMEA base in Muara Tebas.

KUCHING: Six fishermen were plucked from the sea after spending three hours clinging to each other after their boat sank near Pulau Burong, about 30 nautical miles from here on Saturday night.

The six men, all from Kampung Maludam in Betong, had departed from their village around 5pm to deliver fresh prawns to Bintawa here when their 10-tonne fishing vessel suddenly began taking in water about half-way into their five-hour journey.

Boat captain Rakawi Aris, 62, told reporters the speed at which their vessel took in water meant they were only able to salvage their wallets and identity cards, which they wrapped in plastic bags, along with a solitary mobile phone and flashlight.

“I instructed everyone, including my son Saimi, to tie makeshift floatation devices in the form of plastic bottles and plastic drums onto their limbs and body while I myself used an old battered life jacket, which was the only one onboard,” said Rakawi, a fisherman for over 20 years.

Together with the others on board, later identified as Masdar Juki, Sapri Lepet, Wan Yakop Tengku Maliki and Salleh Badar, both father and son abandoned ship and clung to each other as the vessel disappeared underwater within minutes.

“The weather was fine except for a light drizzle. The wind was not strong and there were no big waves. We did not collide with anything under water, so I really don’t know what could have caused the boat to sink like that,” said Rakawi after his ordeal. 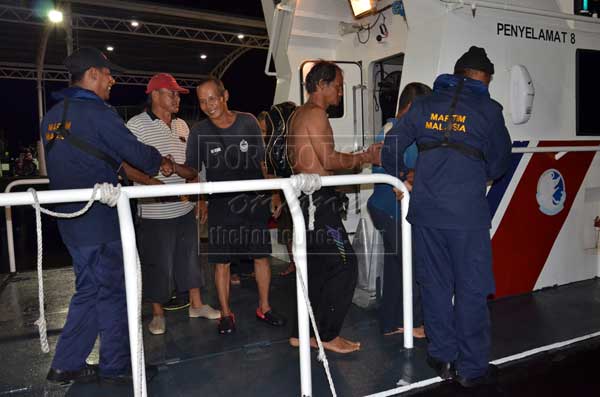 THANK YOU: The rescued fishermen thank MMEA personnel for helping in the search-and-rescue operation upon arriving at MMEA base in Muara Tebas.

He added that 47-year-old Saimi, who held their mobile phone above water the entire time, sent a distress call to Maludam Fishermen Association (MFA), prompting its members to mobilise a search-and-rescue operation comprising more than 10 boats.

Meanwhile, the Malaysian Maritime Enforcement Agency (MMEA) also despatched a rescue vessel from its base in Muara Tebas to search for the fishermen after being notified at 8.30pm.

MMEA district enforcement chief Maritime Leftenant Rayhaizie Abdul Malek said its vessel arrived at the scene of the incident at Pulau Burong, some 30 nautical miles from Muara Tebas, to find the victims had already been plucked out of the sea by one of the fishing boats sent by the MFA.

“Except for suffering from the effects of being in the cold water, they were all in good health and uninjured.

“We brought them back to MMEA base to have them sent to Sarawak General Hospital for a medical checkup, and notified their families of their rescue,” said Rayhaizie, adding that it was the fourth time MMEA was involved in a search-and-rescue operation this year.

Rakawi is due to celebrate his birthday in two weeks’ time. In all his years as a fisherman, it was the first time he had experienced an incident like that.

“I was scared as I had never been through such an ordeal before. I am thankful to God that we are all safe and uninjured and I’m grateful to all those involved in rescuing us,” he said. 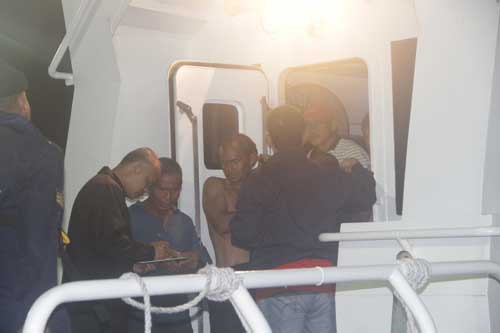 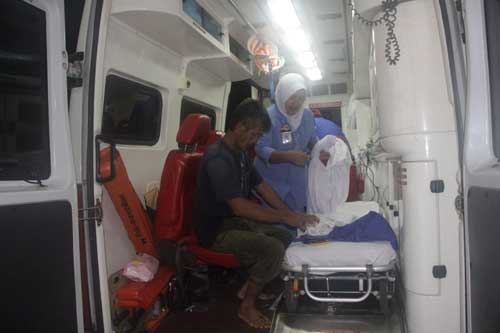 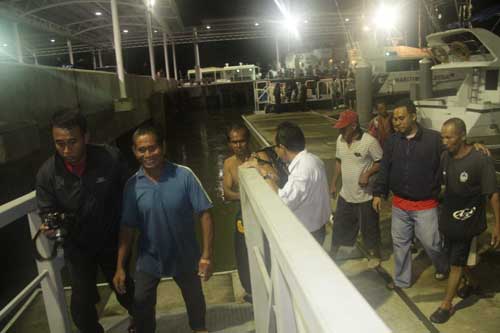