Friday, July 10
You are at:Home»World»Hundreds mourn at funeral for allegedly raped Canadian teen 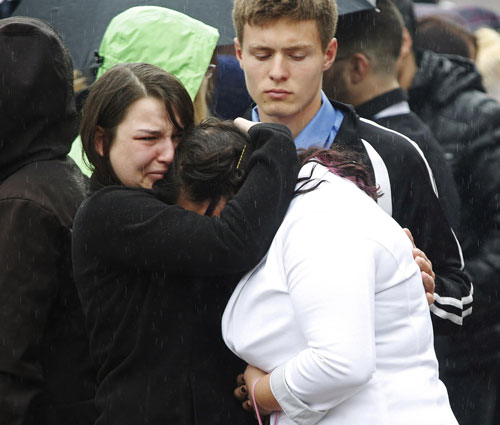 WORDS OF COMFORT: Young people console each other following the funeral service for Parsons outside St. Mark’s Anglican church in Halifax. — Reuters photo

MONTREAL: Several hundred people, including the provincial premier, attended the funeral Saturday of a Canadian teen who committed suicide after facing cyberbullying over her alleged rape.

The death of Rehtaeh Parsons, 17, has provoked outrage in Canada and abroad, and police announced Friday they were reopening their investigation into the alleged sexual assault two years ago.

Parsons died in hospital on Sunday in the port city of Halifax, Nova Scotia, after a suicide attempt that her mother blames on the assault and a subsequent barrage of taunts by schoolmates calling her a “slut.”

Parsons was said to have been drunk at a party when she was raped.

One of the suspects later posted a photo of the incident online.

After the religious ceremony at an Anglican church, a spokesman for the family, a cousin, Angella Parsons, read a statement thanking those who have sent messages of sympathy.

“The family has been recipients of random acts of kindness from people who we don’t even know. The support has been overwhelming, a true testament of the beauty of humanity,” she said.

Nova Scotia Premier Darrell Dexter, speaking to reporters, expressed his dismay as “as a father trying to imagine” this “incredible, unfathomable grief.”

He also praised the family for their choice to rely on the judicial system, responding to those who have proposed punishing the suspected perpetrators of the rape.

The case reignited concerns over cyberbullying, after a similar tragedy in British Columbia in October, and led hacker group Anonymous this week to press for an inquiry, saying they had identified two of the suspects.

Police had investigated Parsons’ initial complaint but no charges were made.