Tuesday, January 21
You are at:Home»News»Sarawak»‘Surrender homemade guns to the police’ 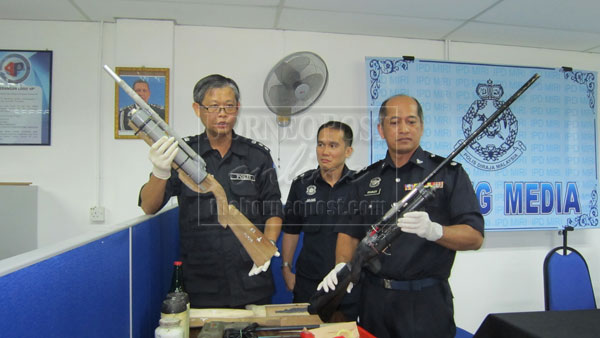 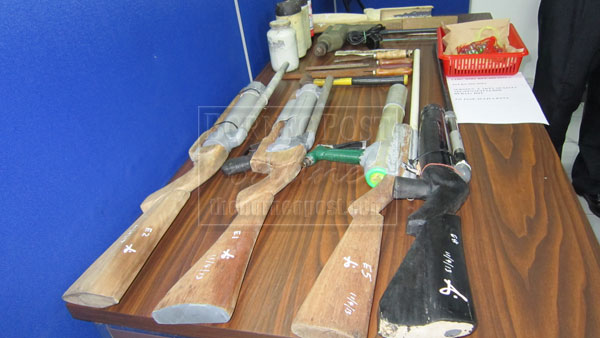 SEIZED: Four homemade air rifles and other gadgets confiscated from a house in Taman Tunku.

MIRI: The people here who have in their homemade guns are urged to surrender them to the police station or risked legal action taken against them.

District police chief ACP Mun Kock Keong told a press conference here yesterday that they would not compromise with any group of individuals found in possession of the guns.

“It is a serious offence to possess such gun. The offenders could be jailed up to 14 years if found guilty under Section 4 of the Firearms (Increased Penalties) Act 1971.

During the press conference, Mun showed several homemade air rifles confiscated from a labourer at a house in Taman Tunku here on April 11.

The arrest was made following a public tip-off who believed that the suspect had been involved in a number of housebreaking and theft cases here.

“Based on information, a police team raided the house and found four homemade air rifles, two butts of unfinished guns and a plastic bag containing several marbles used as bullets,” he said.

Also confiscated were various gadgets used for making the firearms such as drills, hammer and glue.

The 41-year old suspect from Kapit was detained at the central police station here to facilitate investigations.

“We have yet to ascertain the reasons for making the air rifles. However, judging from the number of rifles being made, we believe there are reasons for doing it,” he said.

Mun said the case had been referred to the Senior Federal Counsel for further actions.