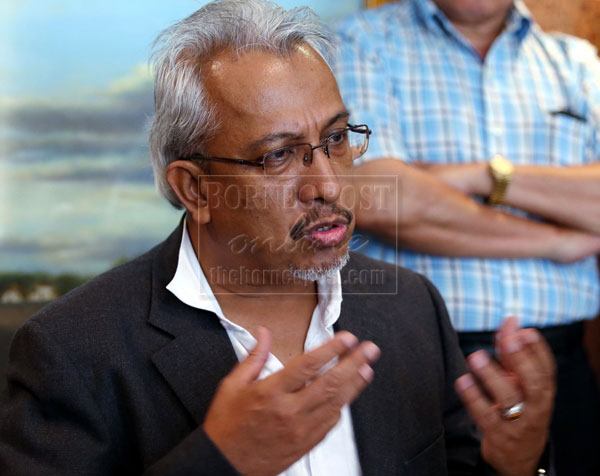 PENAMPANG: Ansari Abdullah has labelled fellow counterparts in the opposition camp, the Angkatan Perubahan Sabah (APS), as “liars” for failing to keep to their alleged promise not to field any candidate in the 13th general election (GE13).

In fact, the Parti Keadilan Rakyat (PKR) supreme council member has also criticised his own party leadership for their alleged failure to provide the “autonomy” for Sabah, which he stressed has been preached all the while.

Ansari was referred to the PKR leadership’s decision not to recognise the “decisions” made by several divisions on their preferred candidates.

“The seven proposed candidates’ names which were announced recently are not my list. It is not Ansari’s line-up. It was the decision made by the respective divisions in the West Coast North areas. We were promised the autonomy to make decision as stipulated in the Buku Jinggaand Kuching Declaration.

“Unfortunately three quarterd of the list were rejected, where of the seven candidates, only two made it. It is sad to say but the party has failed the test,” he asserted.

“PKR has failed to show its sincerity, failed to show that it is practicing autonomy. So today, all of us will have to go back to our respective divisions to explain the situation and will make a decision on any future undertaking. Saturday (which is the nomination date) is a very long time to go, and in politics, anything can happen,” he told reporters when cornered after an informal meeting here, yesterday.

It was learnt that the meeting was called following dissatisfaction among several division leaders and members over the newly unveiled PKR candidates’ list by Sabah PKR chief Ahmad Thamrin Jaini in Petaling Jaya, Selangor, two days ago.

Ansari had announced their proposed list which included himself for the Tuaran constituency and surgeon-activist-author Dr Chong Eng Leong for Sepanggar, Mazhry Nasir (Putatan), Anthony Mandiau (Kota Marudu), Mursalim Tanjul (Kudat), Saidil Semoi (Kota Belud) and Jonathan Yassin (Ranau). Only Anthony and Jonathan made it to the fray.

Describing it as “not a total rejection”, Ansari was slightly happy that at least quite a number of PKR leaders are fielded in the coming GE13.

As for APS, he said although seats have been divided for the non-governmental organisation headed by former United Pasok Momogun Kadazandusun Murut Organisation’s deputy president Datuk Wilfred Bumburing and Pakatan Perubahan Sabah (PPS), led by former Umno Supreme Council Member Datuk Seri Panglima Lajim Ukin, he does not see it as ‘disturbing’ but more of ‘lying’.

“I do not see anything he did as helping PKR, may be he helped to kick us out. We look at it in two ways, it is either he is lying or probably someone had forced him to be a candidate, thus making that person a liar,” Ansari said in reference to Bumburing.

“For us, we have a party and constitution. Most of the division chiefs are hurt. They are questioning how can a NGO who is not registered as a political party are involved in politics. It is against the law. It is also intriguing that the government is aware of this but they are not taking any action … or is this also part of their plan?” he asked.

The Tuaran PKR division chief said that for the non-PKR members to contest under the party’s symbol, it is not insulting but rather a sign of betrayal.

“When I was the State PKR chief, I made a Pas member who was a candidate for PKR to fill in the membership form because I do not want to allow a non-member to contest under the PKR symbol. This is a question of principal, party and discipline,” said Ansari who joined the opposition party 14 years ago.

He however stressed that he will not be a candidate this coming election.

On a question whether he would be supporting the candidate for Tuaran (Wilfred), his response: “I am a PKR member, a PKR divisional head and a Supreme Council Member. I will assist PKR members who are contesting, wherever they are.

“I am a lawyer, that is my problem, I am a member of this party and I have the legal and morale responsibility to help PKR members fielded in the coming election,” he said.