Wednesday, January 29
You are at:Home»News»Sabah»Orphaned elephant calf ‘Joe’ is healthy and well 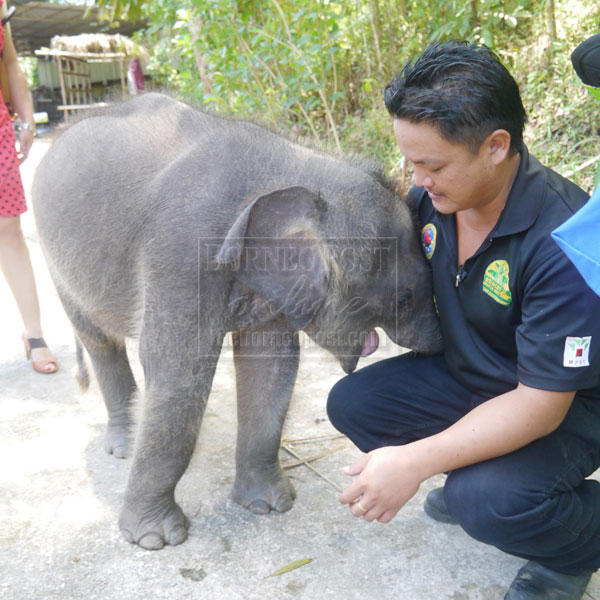 The bond between ‘Joe’ and his caretaker, Augustine.

KOTA KINABALU: It was heart-wrenching looking at the picture of an elephant calf forlornly tugging at its dead mother last January at Gunung Rara.

The elephant calf, who has since been given the name ‘Kejora’ (after the plantation where it was found) and nicknamed ‘Joe’ by his caretakers, is healthy and well – all thanks to the love and care of staff and namely one special person, his preferred caretaker, Augustine David.

“Joe is active and naughty, just like any other child,” said Augustine, when visited by a group of reporters keen on seeing how the six-month-old orphaned calf is doing.

When reporters went into ‘his domain’ at the Lok Kawi Wildlife Zoo, the little calf did what many small children would do in the presence of strangers – he clung on to Augustine.

And like a parent, Augustine stroked the calf’s head, possibly trying to assure it that it was alright. Soon, Joe began moving towards everyone, using his trunk to feel a person’s hand, bags, clothing and so on.

“He has gained 50kg since his arrival. He is 150kg now. He is still nursing, and we give him three litres of milk every two hours. He ‘wails’ when he is hungry,” Augustine said of Joe.

He added that Joe was not like that in the initial stage.

“He was quiet, very insecure. Now, he can be naughty and plays a lot,” he said.

It has been three months since SWD’s sad discovery at Gunung Rara where 14 pygmy elephants were found dead – one of which was Joe’s mother.

Yesterday, reporters were informed that the death was due to ‘caustic intoxicant’, which in layman terms meanS ‘unidentified toxic poisoning’.

SWD chief veterinarian Dr Sen Nathan said that ‘Joe’ would probably stay with them for several more years. Efforts to rehabilitate him back to the wild will probably take place when he is about five years old or six.

“But this (the elephant rehabilitation programme) would be a first in Sabah. We have never tried it before. So we won’t be able to say if it will be successful. For now, Joe probably thinks he is more human than elephant since he is cared for by a human. It will be difficult to rehabilitate him to the wild because he has lost his fear of humans and will probably just wander into human settlements when released to the wild,” he said.

He added that an elephant rehabilitation programme has been carried out in Sri Lanka, but even then, it was not tremendously successful.