Sunday, September 27
You are at:Home»World»Suspect arrested in US over Obama ricin letter 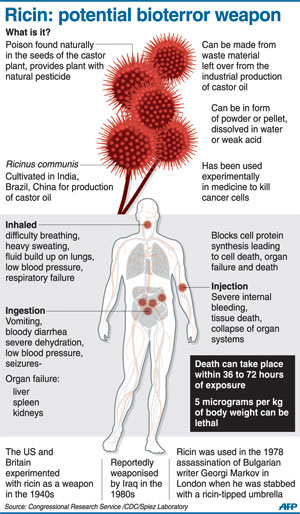 WASHINGTON: A letter addressed to President Barack Obama tested positive for ricin, and authorities arrested a suspect, stoking alarm in Washington on Wednesday after an earlier scare over poisoned mail.

The FBI said there was no connection between blasts at the Boston marathon that killed three people on Monday and mailings sent to Obama, Republican Senator Roger Wicker and an unidentified Mississippi justice official.

Special agents on Wednesday afternoon arrested Paul Kevin Curtis, “the individual believed to be responsible for the mailings of the three letters sent through the US Postal Service,” the bureau said.

The letters “contained a granular substance that preliminarily tested positive for ricin,” it added in a statement.

Earlier reports had said that the letters to Obama and Wicker, which never reached them, were signed “I am KC and I approve this message.”

Curtis was arrested at his home in Corinth, Mississippi, according to the FBI.

After preliminary tests on the Obama letter showed traces of ricin, further examinations are to be carried out in the next 24 to 48 hours, the FBI said.

The US Secret Service said the letter to Obama had been intercepted at a mail screening site on Tuesday, the same day authorities said a letter sent to Wicker also showed traces of ricin.

Ricin – a highly toxic protein found in castor beans – can, when inhaled, cause respiratory problems. Ingested orally, it is lethal in even minuscule quantities.

Secret Service spokesman Edwin Donovan said the agency, which protects the president and his family, was working closely with the US Capitol Police and the FBI to trace the origins of the letter.

A filter at a second mail facility had tested positive for ricin, according to the FBI, which warned that more letters could be received.

But it added: “There is no indication of a connection to the attack in Boston.”

Senator Carl Levin, meanwhile, issued a statement saying one of his staffers had discovered a “suspicious-looking letter” at a regional office in Michigan and handed it over to authorities for further investigation.

The staffer had no symptoms, but was being held in hospital overnight as a precaution, the senator said. — AFP