Monday, February 6
You are at:Home»World»Bosses arrested over building disaster
For the freshest news, join The Borneo Post's Telegram Channel and The Borneo Post on Newswav. 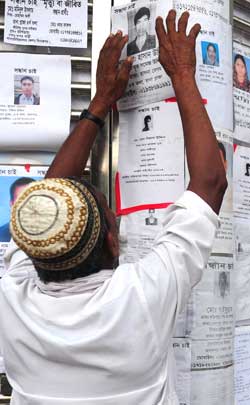 STILL MISSING: Bangladeshi man puts up a notice of a missing family member three days after an eight-storey building collapsed in Savar, on the outskirts of Dhaka. — AFP photo

SAVAR, Bangladesh: Police made a series of arrests yesterday over Bangladesh’s factory collapse disaster as the death toll rose to 337 and distraught relatives lashed out at rescuers struggling to detect signs of life.

Around 40 people were pulled alive overnight from the ruins of the eight-storey Rana Plaza compound which caved in on Wednesday morning while thousands of garment workers were stitching clothes for Western brands.

But emergency workers warned their task was getting harder as any survivors still trapped in the rubble were now too weak to call for help.

News of the arrests of two factory owners as well as two engineers came after Prime Minister Sheikh Hasina vowed that those responsible for the country’s deadliest industrial disaster would be hunted down and punished.

Police had filed a case against them for “death due to negligence”, said Mukherjee. The overall owner of the building had still to be traced, he added.

The senior investigating officer Kaiser Matubbor told AFP that two municipal engineers who had given the building the all-clear after an inspection on Tuesday night had also been arrested and would face similar charges.

Survivors have said the building developed visible cracks on Tuesday, but bosses ordered staff to return to the production lines when they protested.

Five factories were based in the complex at Savar on the outskirts of Dhaka. Bangladesh is the world’s number two manufacturer of garments and the industry is a key driver of the economy. But it has a shocking safety record, with a fire at another factory killing 111 people in November.

British low-cost fashion line Primark and Spain’s Mango have acknowledged having their products made in the block, while other brands including Walmart are investigating.

The accident has prompted new accusations from labour activists that Western companies place profit before safety by sourcing their products from Bangladesh where textile workers typically earn less than 40 a month.

Hundreds of relatives of missing workers have massed at the disaster site to watch the rescue teams try to find their loved ones.

National fire service chief Ahmed Ali said rescuers were having to battle exhaustion and a growing stench from decaying bodies.

“We believe some people are still alive. But they are too weak to call for help,” he told AFP.

Ali said rescue chiefs would meet with experts to decide whether to employ heavy lifting equipment to reach those still trapped in “some air pockets”.

Teams of soldiers and firefighters have so far only used hand tools like cutters and drills, fearing heavier equipment could dislodge masonry. An army spokesman put the death toll at 337, with 2,417 pulled out alive since Wednesday.

Although the discovery of more survivors overnight gave fresh impetus to the rescue effort, there was growing anger at its pace.

“I’ve been here since Wednesday. We still don’t know what happened to my aunt and sister-in-law,” said Harunur Rashid. — AFP