Sunday, February 5
You are at:Home»Features»Don’t give up on ‘special’ kids
For the freshest news, join The Borneo Post's Telegram Channel and The Borneo Post on Newswav. 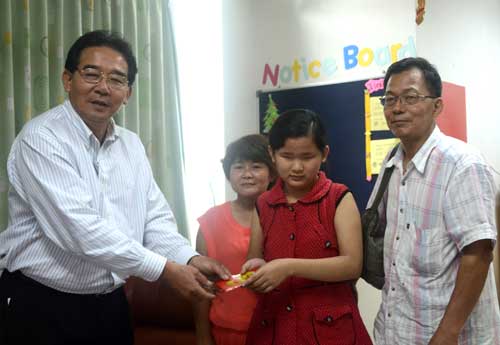 IF Yap Fang Ling fails to achieve her dream of becoming a lawyer, the whole Sibu community should bear the responsiblility for it.

A strong statement, no doubt, but what Dr Toh Teck Hock, paediatrician & head of Clinical Research Centre, Sibu Hospital, who made this statement, was emphasising was that all opportunities should be given to disabled but gifted children like Fang Ling — who are among a marginalised and neglected group in our society — to achieve their ambitions.

Fang Ling is born blind but she is academically gifted. She scored 4A and 1B in her UPSR last year and is now doing her secondary education at SMK Sungai Merah. She is interested in reading law after her schooling.

Anyone who knows Sibu well will not blame Dr Toh for his statement. For after all, the locals have managed to parlay the support of the government, NGOs, private individuals, local representatives — MPs and state assemblymen — and trained personnel like Dr Toh into a care centre called the Agape Centre.

“The good relationships between the private sector and the government are clearly at work here. People are not selfish and there is no personal agenda. Everyone contributes in his or her own capacity for the betterment of the marginalised and the needy,” Dr Toh told thesundaypost. 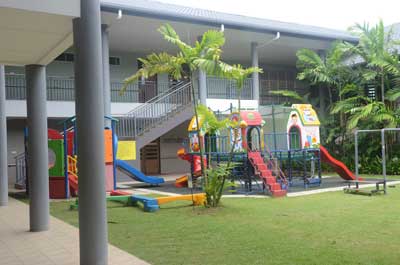 WELL-EQUIPPED: A children playground in the courtyard of the Agape Centre.

The land for the Centre was given by the government while the construction cost was borne personally by Lanang MP Datuk Tiong Thai King. All the other equipment came from various NGOs.

The four NGOs, housed in the Centre, provide services, management and financial support independently. It’s an exemplary case of a successful community effort to address the needs of marginalised communities, especially ‘special’ children.

According to Dr Toh, 15 to 20 per cent of children are born with disability of various forms and severity. The visually impaired like Fang Ling and John (not his real name) who was born with multiple-disabilities, account for 0.5 per cent of the total number of babies born each year.

As such, it’s no surprise the setting up of the Agape Centre was so readily welcomed and accepted.

Awareness of the needs of ‘special’ children came late to Sibu. In 1998, the Law King Howe Memorial Children Clinic was started by the Paediatric Department under the Health Ministry, followed by the setting up of various NGOs for ‘special’ children.

The idea to set up the Agape Centre was mooted in 2000 and finally realised in 2006. Subsequently, there was a sharp rise in awareness of the needs of ‘special’ children in Sibu. 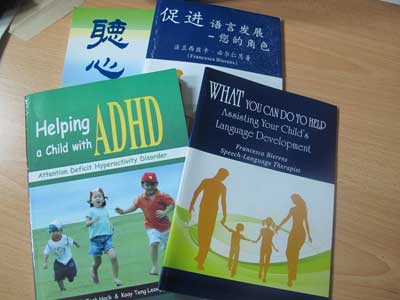 ACQUIRING KNOWLEDGE: Some ‘special’ children literature on sale at the Agape Centre.

Once the seed was planted, it took on a life of its own and started to grow. Parents of ‘special’ children and normal children, began contributing to the Centre. Disability, after all, is everywhere if one cares to look around.

Dr Toh was persuaded to return from Melbourne in 2004 to join the paediatric clinic at the Agape Centre. He is the natural choice because he knows most of these children and is also one of the prime movers behind the surge in awareness of the needs of ‘special’ children like Fang Ling and John.

At one stage or another, they have all stepped into the Law King Howe Memorial Children Clinic to see him for consultation.

As the needs of some of the ‘special’ children were apparent and urgent, Dr Toh together with the parents started to appeal for a primary integration class for the visually impaired to be set up.

The Education Department gave its nod in 2009 and the class was subsequently formed at SUDC No. 3. It was again a community effort.

One advantage of having the paediatric clinic at the Agape Centre is that ‘special’ children can be identified at very young age.

Advocating early intervention and education opportunity for these children, Dr Toh popped this question — what happened after the diagnosis?

“Although ‘special’ children may be born with certain genetic defects, the way they turn out is very much influenced by their parents or family and their living environment,” he explained.

Citing the example of obesity, he said genes could be blamed to a certain extent but at the end of the day, the environment and education played an even greater role.

An effective education may lead to a healthy life which could also bring obesity under control. In tackling health problems, Dr Toh believes prevention is better than cure — or correction in the case of congenital disabilities. 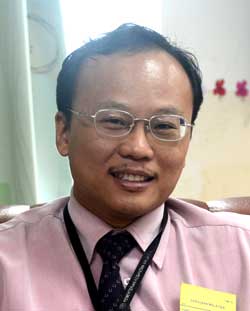 When Dr Toh first started to serve the Sibu community, some of the autistic children he saw had already reached the age of seven, eight or 12. By then, they had already formed complicated behaviour where correction was hard or even impossible.

“At that stage, what we can do, as doctors, is very minimal — apart from giving medication. And most times, medication does not help,” he said.

Early intervention will prevent that from happening.

The younger the disabled children are educated, the more receptive they will be to what is taught them — which also means less problematic behaviour. However, this can be costly as early training requires a lot of resources.

To cast the net wider, the Paediatric Department at the Centre, together with the NGOs, have been working with kindergartens to help these pre-school establishments detect disabilities among their students.

“Now, we see children with autism being trained at the age of two years compared to 2004 when the children we were seeing were already seven or eight when their behaviour was already too complicated to correct,” he said.

The work on ‘special’ children in Sibu started with limited resources, especially in terms of professional manpower. However, Dr Toh had preferred not to wait until all facilities and manpower were in place to take the first step — with or without resources.

“We can continue to demand for qualified professionals in every area such as psychologists, speech therapists and so on. But we know this is not going to happen soon and if we continue to wait, we will miss the golden opportunity to train these children.

“We can just sit back and complain but we will not get anywhere. Or we can make the best of whatever resources we have and take the first step to make things better,” he added.

The next thing after identifying and educating the ‘special’ children is to educate the parents themselves.

“The parents need to recognise and accept their children’s disabilities. They have to do so as early as possible rather than denying it or waiting to deal with it only when their children are older. By that time, it will be too late.”

After pushing for the primary school integration class in at SUDC No. 3 in 2009, Dr Toh saw the urgency — four years down the road (2013) — to start a similar school at the secondary level not just for Fang Ling but 10 more like her.

“Three are in Batu Lintang while Fang Ling will attend SMK Sg Merah. My question is where are the rest?”he asked.

Since the Education Department has agreed to revive the secondary school integration class for visually impaired, Dr Toh is looking for those children missing from the education system.

“The big challenge here is that some parents cannot see any hope for further improvement in their disabled children. To these parents, as long as the children stay healthy, it’s enough. In this respect, I think the parents should be more demanding,” he stressed.

“We should never give up hope. Every child is special.

AGAPE CENTRE: A new landmark in Sibu — one that symbolises close communal spirit where everyone chips in to help the marginalised group of ‘special’ children.

It’s a matter of recognising what the child can do and pushing the child one level up — and that level has, of course, to be realistic. Every child is different. Everyday the child makes an improvement, it’s a success.”

For academically gifted ‘special’ children like Fang Ling, every opportunity or resource should be provided to help her continue her studies. And there should be high – rather than low — expectations of her performance.

For other ‘special’ children, a success may mean a step taken, a word uttered or a gesture acknowledged. All these successes should be celebrated.

“We have to be honest with ourselves and parents need to accept their children the way they are. With realistic expectations, whatever improvements we witness will be something to celebrate,” Dr Toh added.

Admittedly, for ‘special’ children, success may be slow as only a step can be taken at a time.

For a success to happen, it means many hours of hard work on the part of many — parents, teachers, therapists as well as minders who give encouragement, guidance and help in what little way they can.

It will take the whole society to give ‘special’ children a chance at life. The Sibu community has stepped up to the plate for Fang Ling but it also has to pool their resources to come through for severe cases like John’s.

Dr Toh who describes the Sibu community spirit as unique, is keeping the faith — that various sectors of the community will continue working hand-in-hand to give all ‘special’ children love, hope and a better life.